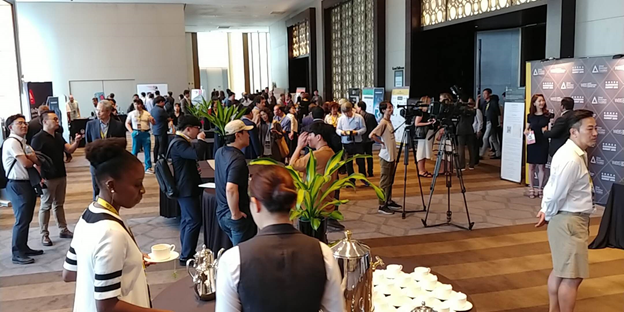 Pegasus Coin, by Kazakhstan Horseracing Association, was one of the main sponsors of the Korean Blockchain Summit held in the Intercontinental Hotel in Seoul. The event was held on the 12-13th July 2018, and was organized by non-profit organization, Global Blockchain Foundation.

The event began with a keynote speech by the Chairman of Korea Blockchain Association, Chin Dae-je, and notable attendees include former president of FC Barcelona, Joan Laporta.

A variety of topics were covered throughout the event such as the legislative and policy landscape of blockchain & cryptoeconomic innovations, in-depth analysis of security tokens, the future of digital transformation as well as the utilization of digital assets in everyday lives.

The event was well-received with over 1000 participants and ended with a Global Blockchain Foundation Networking Cocktail Evening.

Pegasus Coin is a revolutionary utility token that will be used within a 113-hectare Horseracing Park located in Kazakhstan. The token will also be used to facilitate the horse blockchain, a platform which will include a horse registry that enable the traceability of horse origins and other genetic information.

Pegasus Coin was a Gold Sponsor at the event and provided the concluding keynote speech and presentation at the event in regards to their upcoming ICO which is expected to launch by the end of the 3rd Quarter 2018.

The Pegasus Coin seems to take a refreshingly different approach compared to most ICO concepts; focusing on establishing its physical usage as a first priority, unlike other cryptocurrencies that hope to attain physical utility at some point in their future roadmap.