The Mod Revival of 1979, kicked off by the movie ‘Quadrophenia’, revolved around The Who and throughout the whole of the eighties and early nineties The Small Faces were largely forgotten. There was the occasional compilation album or two but virtually nothing in print; so as a fan since 1965 just imagine my joy when I (John Hellier) stumbled across a fanzine called ‘Darlings of Wapping Wharf Launderette’ around 1993. It was produced by two guys, Steve Chamberlain from Merseyside and Stuart Wright from Dagenham, on a shoe string budget and was an incredibly basic cut and paste job, but it excited me. 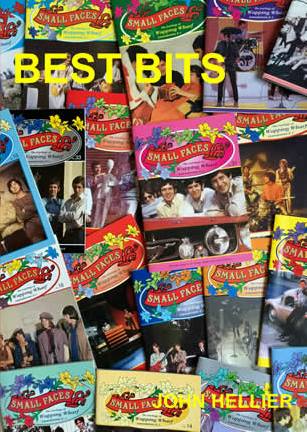 I wrote to them and told them of my delight and offered to write a story for issue 2. They took me up on my offer and further contributions from myself appeared in issues 3 and 4, after which the fanzine was on the verge of folding due mainly to the fact that very few people were buying it I just couldn’t stand by and see it die so I stepped in and took over the editorship from issue 5. I took it upmarket with a new glossy 40 page format and have never looked back, from that moment onwards the popularity and readership soared. By issue 20 it was the biggest selling self published fanzine in the country, overtaking the established Eric Clapton magazine ‘Where’s Eric’ and was attracting readers worldwide.

Fans were purchasing from literally every continent on the planet and with the advent of the internet it has grown in stature and sales ever since. 40 issues on, it was time for a ‘Best Bits’ compilation in the form of an A5 book and here we are! Definitely the BEST Small Faces publication ever!