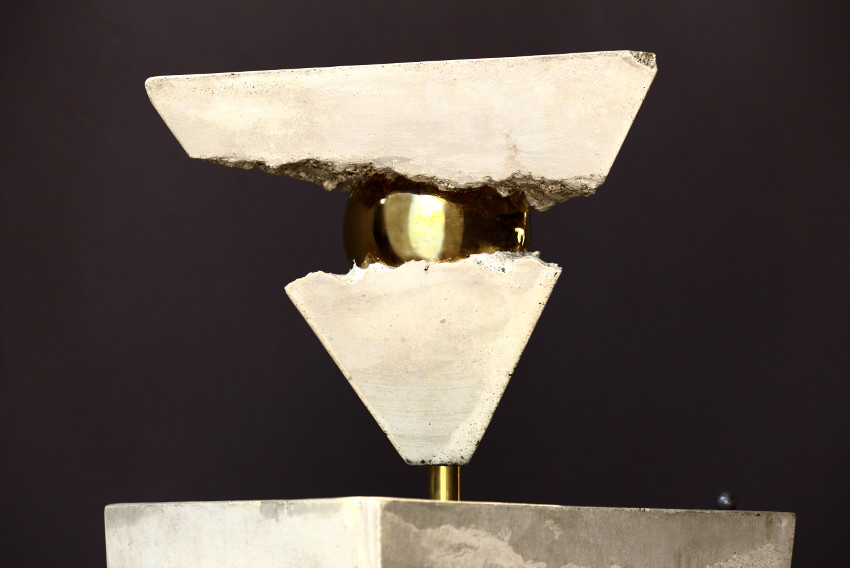 On Saturday 21st July 2018, the public remained enthralled while admiring for the first time the original of the sculpture in marble dust and meteorite fragments made and exhibited during the art biennial of Saint Paul de Vence by painter and sculptor Cesare Catania. The sculpture, entitled “The Heart of the Earth – B Version”, was installed right at the entrance to the French art capital and represents in one single object all the elegance and harmony of simple tridimensional polygons intertwined with each other: the pyramid and the sphere at the center of everything.

It’s a sculpture of contemporary art that connects to a previous work of art in wood and acrylic made by the same artist between 2012 and 2015, entitled “The Heart of the Earth – A Version”.

The sculpture “The Heart of the Earth – B Version” draws inspiration from the same concept of strength and energy that releases the Earth and was made of Carrara marble powder and white cement. To give even greater emphasis to the energy aspect, the artist wanted to combine the remains of a meteorite in the mixture.

The origin of the latter and the historical dating of the body from thousands of light years are controversial: the only certain data is that they are fragments belonging to the meteorite cataloged by the official bodies and by NASA as “Meteorite Gibeon”, fallen in prehistoric times in the southern region of Namibia (Africa) and some pieces of which are exhibited in the most famous geology museums in the world.

In this work of art Cesare Catania wanted to concentrate all the strength of the elements considered to be of greater energetic impact: the inverted pyramide and the sphere, the marble dust coming from the Earth and the meteorite fragments coming from the Universe.

The sculpture was installed on Thursday 19th July 2018 and it was officially presented to the public two days later, with great ceremony and red ribbon cutting, thanks to the supervision and organization of the contemporary art gallery ODD Gallery of Anne Turtaut. VIPs like Anastasiya Vrublevskaya also attended the event.

Click for this release in FRENCH or ITALIAN languages.