The Film About a Japanese Humanitarian Soldier Wins Award in Yogyakarta 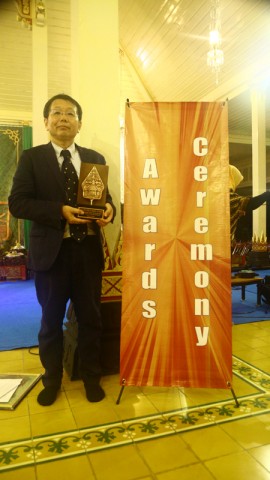 This award marked a milestone for the film that first screened in 2016. The juries of the Festival values the humanitarian aspect, the message it carries, its uniqueness, and thought that it deserves an award and the global audience.

World Film Awards is an international film festival focuses on finding high-quality independent films. The festival also aims to support film with a great message and help to promote it to the world. “It is such a great honor to win this award. I am very happy, and I like to make an effort for this film to be screened all over the world,” said Mitsuda with high hope.

The Rainbow over the River Kwai is a 120 minutes documentary about Takashi Nagase, a former interpreter for the Japanese Imperial Army. He then devoted himself for atonement, reconciliation and making peace with ex-prisoners of war and Asian laborers who were forced to work on the Thai-Burma Railway built by the Japanese Imperial Army during the World War 2. The documentary describes the journey of Takashi Nagase in the last 20 years of his life. Before Takashi’s death in 2011 in the Okayama Prefecture, he wished that his ashes along with his wife, Yoshiko to be scattered at the River Kwai.

Yasuhiro Mitsuda, who first started his career as a TV Journalist, explained that the film was initially made in 1994 in 13-minute length. Until 2016 he has made eight documentaries about Takashi Nagase. “I was very moved with Nagase’s action and how he felt guilty about his past. He is a humanitarian. Sometimes people only think about themselves but Nagase thought about others for the rest of his life. I respect him for that,” said Mitsuda sincerely. Yasuhiro finally decided to make a feature documentary about Nagase after his death, to continue his wish for peace and reconciliation.

“One of the moments that moved me to focus on making a film about Nagase is when I traveled with him to Thailand. We came across a British ex-prisoner of war and other people there on a memorial day to remember their loved ones. They were angry at me and Nagase because we are Japanese. I tried to talk to them but they refused. At that moment, I decided that I have to make a film about this issue. I realized how many people are still affected by this. I hope with this winning, people out there could know that there is one Japanese who had been trying to make a difference and I hope this film could change their point of view.”

This film shows how Nagase felt guilty, how he tried to compensate the victim by helping and creating a better world for the ex-prisoners and how he then founded River Kwai Peace Foundation, a foundation that gives scholarships to Thai students every year. “I want to show people like Nagase, and how he had been living in dignity, carrying his profound grieve. Nagase is an example that people could change.”

When asked how does he felt about the World Film Awards he said with a wide smile, “This festival is very cultural and nothing like I have ever seen before. It is an unforgettable experience and I don’t think I’ll ever find this kind of festival anywhere in the world.”