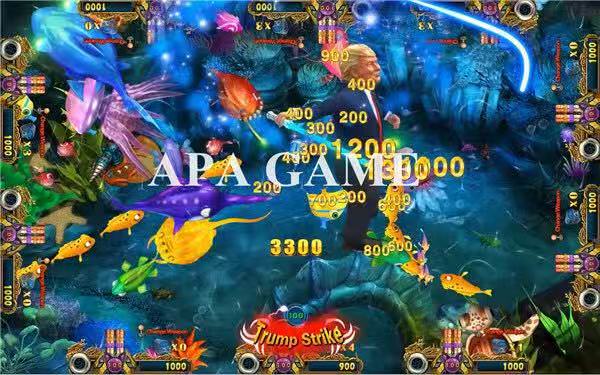 The current president of the United States, Donald Trump has always been in the news for one or another reason. Trump remains a topic of curiosity for billions around the world. And now, a new kind of arcade fishing game comes with an inbuilt character of Donald Trump, allowing gamers to enjoy the interactive features of the game with Trump’s own presence in the game.

Developed by APA Game, the Trump fishing game machine will allow players to see Trump in action. This could be a lot fun and entertaining where the US President can be seen involved in a casual fishing game. While Trump is well-known for his big and transformative decision making, one can now witness his fun side in this game. The gaming machine comes with attractive and high quality HD graphics and presents the Donald Trump character in a respectable manner. According to the spokesperson of the company, this is just another game with no attempt to degrade the position and prestige of a head of a nation. In the game, Trump appears in his usual attires and plays an important role of a hunter in the game.

APA Game has designed the trump fishing arcade fishing game for the new-age gamers who have particularly some interests in the character and life of the head of the world’s most powerful country. The game developer has already been acclaimed for its several games before, such as monster awaken, lion strike, tiger strike, king of tiger, ocean monster and other games. The spokesperson is confident that this Trump fishing game will also become hugely popular among gamers all around the world. According to him, they already have started shipping the Trump fishing game machines to the customers. Many gamers are appreciating the unique concept of the game, in which the US President has been intelligently roped in to add to the excitement of the gamers all around the world.

The trump bomb fishing game is a new kind of fishing game that comes with electrifying features. Gamers can get involved in the fish hunting where Donald Trump could be the role model. With an interesting game play, this fishing arcade game could prove a great profit maker for video game parlors across the world. APA Game can supply gaming machines with both coins out and ticket out modes, and customers can choose game machines as per their convenience. The game machine can also be equipped with a printer of a bill receiver, as per the demand of the video game shops. The spokesperson reveals that they can handle bulk orders for this new Trump gaming machine and can supply the machine in any quantity as asked by the customer.

To know more about the Trump fish arcade game machine, one can one can visit the website http://www.apagame.com.

APA GAME( Asia Pacific Amusement Consultants Co., Ltd.) was founded in 2011. The company is located in Panyu, which is the largest game machine industrial area in China. APA Game specializes in the international trade of gaming machines and they import gaming machines from Japan and export all kinds of gaming machines from China to overseas. They work with reliable manufacturers and source products at targeted prices.