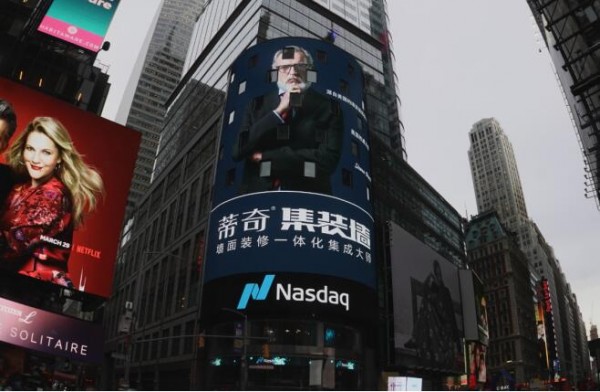 Nasdaq Big Screen in New York’s Times Square is not only recognized as the “world crossroad” where wealth and culture integrates, but also one of the best windows to attract the world’s attention. Here, the annual visitors flowrate is as high as 450 million, and the global high-end brands have long spread their brand image here. Deech Gem Join Wall landed on the Nasdaq big screen reflects the strength and connotation of the Midland City Group, also brings its brand into a new milestone, let the world witness the arrival of wall decoration new era.

It is reported that the Deech Gem Join Wall was unveiled in Times Square, New York, attracting the attention of many authoritative medias like Digital Journal, Market Place, NRC, Ruinbow Newsline, Daily Herald, Journal Sentinel, Morning News, Psot-gazette and Azcentral, etc. A number of overseas medias reported on the live broadcast of the Deech Gem Join Wall, the first time, and highly praised it as the leader in the field of wall integration and decoration.

Efforts Behind the Success

Over the years, the wall decoration industry has been plagued by wall problems such as wall-alkali turning, wall flour, mildew, grass-roots drums and falling off. In 2003, Melinegroup injected special research and development funds for Dr. Steven Deech’s team. In the research and development of integrated wall materials, after ten years of continuous improvement and innovation, the gel joint wall decoration scheme has been finalized, and the “nine-layer and thirteen-way” process has been promoted to the world users. From the unremitting efforts and research of the past, a core breakthrough that changing the future has changed the field of architecture. Up to now, the quality of the Melinegroup products has been deeply rooted in people’s hearts, and its product quality leads the future. From Washington DC to Los Angeles, from the Empire State Building to the western towns, and from North America to China, the Deech Gem Join Wall has become a standard, a symbol, and an realized dream.

Deech Gem Join Wall, a model of science and art, with a never-ending exploration and creation, calmly interpret its own attitude; 2019, a new era of wall decoration, let us wait and see, make progress together and keep pace with the times!

Sunny Isles Beach, the Florida Riviera, does not Lose its Elegance