HOUSE OF SWEAT AND TEARS // ROCK SALT RELEASING
“An intoxicating and frightening time at the movies.” – Film Threat

Writer-director Sonia Escolano’s (The Vampire in the Hole, Myna Has Gone, Cinq minutes) elevated Spanish horror, HOUSE OF SWEAT AND TEARS (aka Casa de sudor y Lágrimas), is an intelligent film that challenges perceptions while deeply exploring the murky waters of religion, faith, belief, rebellion and power – all with limited dialogue.

“Overfilled with sublime acting, highly effective minimalist cinematography, truly amazing sound design, and one of the best examples of palpable cinematic tension without the use of any musical score,” continued Film Threat.

Based on real events, the leader of “She” is the figure of Amparo Cuevas, the seer of the Escorial. The legend’s tale has noted the Virgin speaking through her, providing her with apocalyptic messages to the world, attracting thousands worldwide to leave their homes, families and jobs. HOUSE OF SWEAT AND TEARS follows cult members Ella (Alzira Gómez), Sophie (Coline Charvin), Emma (Padi Padilla), ​​Jérôme (Pablo Macho) and Ruth (Paula Mateu). Operating under strict sadistic leader, “She” violently tests her followers’ devotion through means of worshiping, fasting or cutting themselves. But when a dark, mysterious man plagues a member’s dream, causing her suicide, will “She” be able to maintain control of the cult? Or, will the mysterious outsider’s arrival set “She” and her followers onto a path of ultimate destruction?

“It’s a slow burn experience with a scattering of in your face violence that will shock and unease in equal measure and credit to the up and coming filmmaker for establishing a mood and atmosphere that many such similar films fail to establish,” wrote The Movie Guys.

Escolano’s atmospheric horror feels trapping and claustrophobic, producing a feeling of psychological discomfort. Psychologically vicious, “She” asserts such power by invoking pain as a sign of unwavering loyalty and devotion,humiliating others, and embodies a stressful, dark environment. Shot entirely with candlelight and zero artificial light, HOUSE OF SWEAT & TEARS creates an ominous feeling that is unshakeable and uncomfortable.

“[Escolano] creates a universe that’s as modest as it is scarily realistic, with an elderly leader controlling her white-clad flock with the help of lengthy (and sweaty) visions and unquestionable obedience that she tests almost daily, as if trying to see how much she can actually get away with,” wrote Cineuropa.

To convey the authenticity of the cult, Escolano was in direct contact with an association of relatives who lost their families to live with the leader. The writer-director also embarked on a deep exploration by dedicating a year to study the Bible, while simultaneously working with psychiatrists to create psychological profiles adept to a sect. Additionally, Escolano and Coline Charvin (‘Sophie’) communicated and attended various sect meetings to study their doctrines.

“Asking some interesting questions about blind faith and religious brainwashing, HOUSE OF SWEAT AND TEARS is a solid attempt by Escolano at creating a moody and realistic horror,” concluded The Movie Guys. 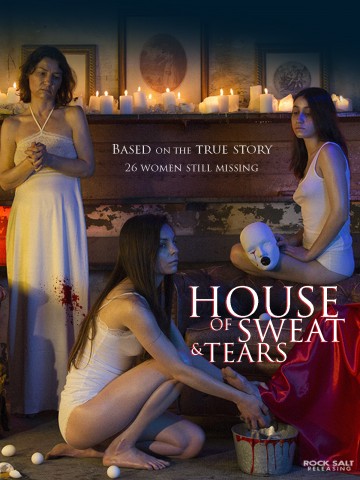 TriCoast Worldwide is a premium international sales agent, representing the best of US and international films at all the major film markets. Sister company to TriCoast Entertainment and TriCoast Studios, the company is located at the Studio facility in Culver City, Los Angeles.