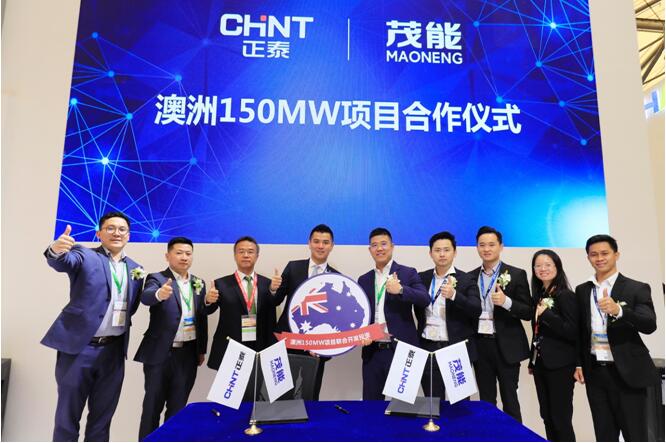 Shanghai, 5th June 2019 – Maoneng and CHINT have announced their partnership at an introduction ceremony on Wednesday 5 June 2019 at the SNEC expo hosted in Shanghai by signing a term sheet to acquire and co-develop utility-scale solar projects in Australia.

The parties will be establishing a joint venture company in Australia, with CHINT taking a majority 60% shareholding and Maoneng having a 40% shareholding. Maoneng and CHINT are looking to acquire and co-develop projects with an enterprise value between $60m-$200m. The parties will not be restricted to traditional project finance in developing the projects, and may seek to develop projects on a pure merchant basis. The JV aims to develop a project pipeline with combined capacity of at least 150MWac by 2019 and 500MWac by 2021.

At the conference, Mr. Morris Zhou, CEO and Chairman of Maoneng and Dr. Chuan Lu, CEO of CHINT have shared their ambition towards building a renewable future for Australia with the development of large scale renewable energy infrastructure.

“We are delighted to partner with CHINT to achieve our ambition of a renewable energy future for Australia. Maoneng has been a key player in the renewable infrastructure development Australian market for many years and CHINT has been a key player in EPC, module supply and project development in the Chinese market, and as such there are strong synergies between the two companies. We look forward to playing a big part in Australia’s transition towards a cleaner and renewable energy future,” explained Mr. Morris Zhou at the conference.

“We are very glad that our capability in production and downstream businesses has been well recognized from Maoneng. Maoneng plays an important role in Australian Solar market and the partnership between two companies also marks a new milestone for both parties. We will put more efforts together with Maoneng in developing the Australian market,” commented by Dr. Lu, Chuan, the CEO of CHINT Solar/Astronergy.

With the execution of the definitive agreements expected to be finalised shortly, Maoneng and CHINT’s strong alliance will benefit Australia’s energy industry as a whole and keep the country on track to generate 50% of its energy consumption with renewables by 2050.

Founded in 1984, CHINT is a publicly listed tier-1 solar panel manufacturer and EPC Contractor, and has developed a business network in over 140 countries and regions with more than 30,000 employees.

CHINT has a track record of developing projects in Australia, having developed 68MW of solar farms in South Australia and worked on project pipeline at 400MW in total.

Maoneng is an Australian-Chinese developer, owner and operator of renewable power generation assets. With a development pipeline of over 1 GW of solar farms within Australia, Maoneng sells energy and large-scale generation certificates to Australian businesses and governments through a combination of medium and long-term contracts.

In December 2017, Maoneng entered into a PPA with AGL Energy and UNSW to supply respectively up to 800,000 MWh and 124,000MWh of renewable energy per annum for 15 years. A portion of the PPA entered into with AGL Energy will be allocated towards the Sunraysia Solar Farm while the balance will be allocated to the next most suitable project within Maoneng’s development portfolio in NSW. 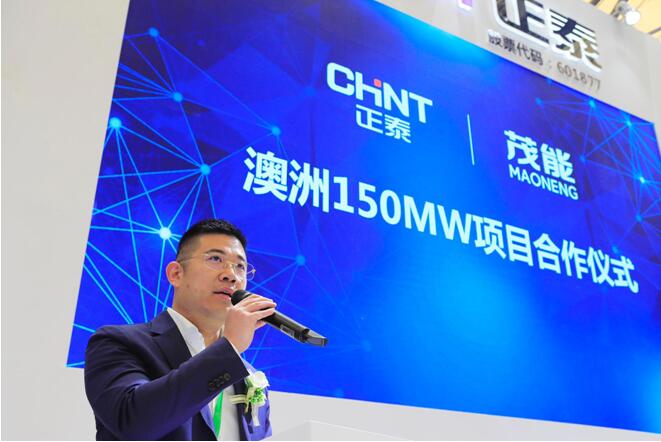