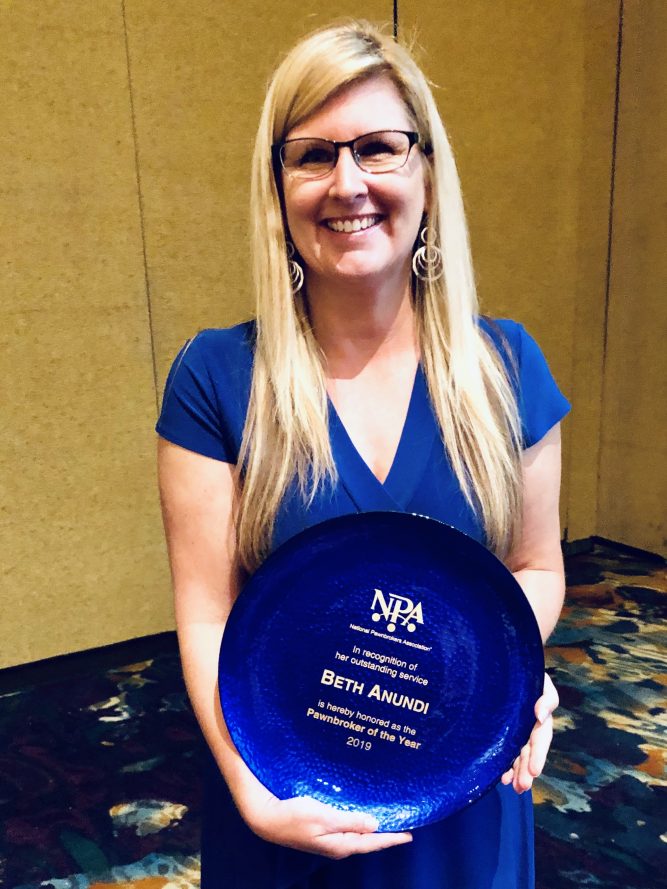 Las Vegas, NV – The National Pawnbrokers Association (NPA), the only national trade association representing independent pawnbrokers, named Beth Anundi of Capital Pawn in Salem, Oregon as the recipient of the NPA 2019 Pawnbroker of the Year Award.

Beth co-owns, operates, and manages Capital Pawn and Capital Couture alongside her husband, Adam Anundi. A beloved and integral part of the pawnbroking industry, she’s known for giving back.

“Almost every pawnbroker I meet has a different background and interesting story about how they got into the industry,” said Greg Engstrom, who won the same Pawnbroker of the Year distinction in 2016. “But Beth is the only person I have ever met to change from teaching to pawnbroking. This has created a dynamic environment in Oregon. She brings a completely different dimension to their store and to the industry. She is very organized and thinks beyond the average pawnbroker.”

Beth has been an active member of the NPA for several years including their Awards Committee and Membership Committee and was elected to the 2019 National Board of Directors. She’s served as a speaker and panelist at numerous industry conferences and has participated in the NPA Legislative Conference in Washington, D.C.

Detroit’s Seth Gold, who was the 2013 Pawnbroker of the Year added “I have had the privilege of collaborating with Beth on a recent project and have been impressed by the impact she has made in recent years both on our industry, as well as in establishing herself as one of our brightest leaders.”

Under Beth’s guidance, Capital Pawn supports several community outreach programs that support their local youth though high school programs, and has partnered with “One Thousand Soles,” a non profit that provides youth with good shoes offering that youth comfort, confidence, participation, and health. Additionally, Beth co-founded “New Growth Ministries,” which provides food, shelter, and hope for youth in crisis. Capital Pawn also supports programs for veterans and others in the community with special needs.

Beth’s influence isn’t limited to the United States. “Beth is not just a pawnbroker, she’s an industry beacon. She runs a class-leading pawn shop and still makes time to mentor her fellow pawnbrokers.  She works tirelessly to improve the public face of the industry and shares that vision with everyone.  We are all better for it,” said Martin Strasser, owner of Premiere Jewellery and Loan in Kelowna, British Columbia, Canada.

The NPA Pawnbroker of the Year Award is presented annually to an NPA member who, through his or her performance, has demonstrated exceptional success in their business and local community and has made a significant contribution to the pawn industry during the previous year.