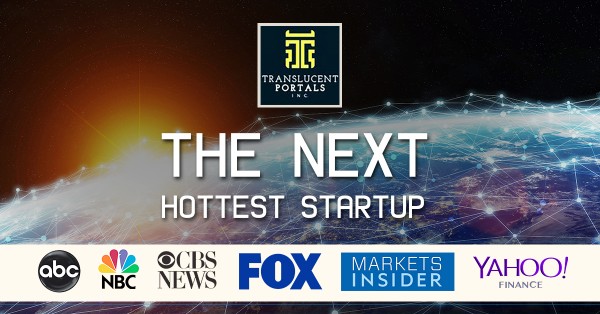 User-driven content platform Translucent Portals is preparing to raise $3.3 million in Series A funding with the intention of going public via a reverse merger. By focusing on niche content and locally-focused news media, the company model is changing how content creators get paid and how advertisers work with digital media companies. By taking the site’s focus away from algorithms and advertiser focus away from broad reach, Translucent Portals strives to put the power back in users’ hands.

DALLAS, TX – AUGUST 22, 2019 – When one thinks of user-driven content platforms, Medium, Paper.li, and TikTok may come to mind since virtually all of the contributions are by their users. Social media would be the next strata as it contains both traditional news media and publications alongside user-created content, but tends to impose specic types of content on its users algorithmically or through advertiser pressure. On a news media scale, local news is often superseded by national news from major cities like New York, Chicago, and Los Angeles simply due to the fact that these areas have larger populations, and thus a larger base to advertise to.

Translucent Portals is entering the sphere to bridge the gap between userdriven content and social media, by giving more power to the users. With advertisers coming to the user base instead of the other way around as it’s always been done, Translucent Portals is aiming to give Facebook and Twitter a run for their money. In true David vs. Goliath fashion, the company is even disrupting the traditional way that capital has been raised for digital media production companies by going public with a reverse merger.

Changing the Way Content Creators Get Paid Currently, there are any number of ways that online content creators can get paid and grow an audience. But they are often insucient since they can lead to creators putting in years of hard work before seeing any money, such as the new rules imposed on YouTube channels where you must attain at least 1,000 subscribers before you are eligible to monetize your videos. While it’s expected to take risks and lose money upfront, this is simply not tenable for most content creators.

Twitter super users feel that the company has enriched itself on the content they’ve created while disenfranchising content creators from the process. Medium writers have diculty obtaining an audience when the algorithm imposes reading lists on users based on established creators while new authors are left behind. Additionally, the esoteric paywall rules can result in stable six-gure incomes for a tiny selection of writers while most writers struggle to get any royalties at all, while the platform forbids crowdfunding and aliate links on posts behind the paywall.

When even legendary artists like Mariah Carey aren’t making much by streaming their music on Spotify, it proves that it’s time to change the way that content creators get paid. Translucent Portals seeks to completely disrupt this model by giving content creators residuals every time their work is downloaded or viewed, with the standard 30% going to the platform and 70% to the creator. Unlike the more opaque algorithmic models that are plaguing sites like Medium, Steam, and so on, content creators aren’t just ensured that they will get compensated every time their content is consumed, but they will have a very curated group of users specically interested in their content so they are not competing with thousands of advertisers and users with bigger audiences.

Reversing the Advertiser Dynamic Traditionally, on digital media sites, users create content and it is supported by advertisements. While this adsupported model has sustained a number of social media and news sites for the past decade, it’s not only been troublesome for content creators but also for users who are tired of being inundated with irrelevant ads. There is a push-pull dynamic where users have ads pushed on them that may not necessarily cater to their interests, and they have no control over what is being advertised to them even if the ads are based on their search history or past activity on the site.

Translucent Portals is centering their advertising model around putting the community before the advertisers. The distribution model is based on a network of specic niche websites that have at least 100,000 users if not more. Users create content solely for other community members, and functions as a readymade “block” of potential advertising targets, but in order to be effective they must advertise based on that niche or other attributes (such as location) to deliver more relevant results for users and advertisers alike.

From Prison to Educational Tools to Disrupting Content Distribution Founder Adam Hamid served nine years in prison for drug-related offenses, and used the time to study economics and marketing with Ohio University’s correspondence program. He turned his life around and became an entrepreneur after his release, using his experience tutoring other inmates to start Teacherspartner.com and educational technology ROUSIX after using nancial help from family and his own credit cards as startup funds. Upon teaming up with Robert Tomlinson, company President, and an advisory team of bankers, educators, and investors, the company is currently raising $3.3 million in Series A funding with a valuation of $33 million.

Nowadays, digital content companies tend to stay private for prolonged timeframes, often not until years after Round C funding. Silicon Valley companies previously chased aggressive growth to do an IPO as soon as possible. Translucent Portals has taken an entirely different approach by going public with a reverse merger in order to raise capital more eciently. The company plans to use the Series A funding to expand operations with dedicated oce space, prepare the necessary Rule 15c2-11 documentation, hire staff, and expand their reach.

Translucent Portals is a user-driven production and distribution company for media content. Focusing on niche markets such as education and local areas, Translucent Portals builds dedicated communities of members who both supply and consume the content offered on its websites.

“Translucent Portals is aiming to give Facebook and Twitter a run for their money. In true David vs. Goliath fashion, the company is even disrupting the traditional way that capital has been raised for digital media production companies by going public with a reverse merger.”