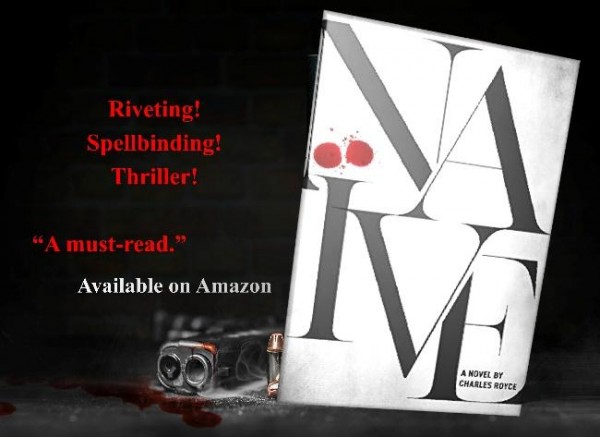 New Orleans, LA – December 3, 2019 – Author Charles Royce announced that his debut novel “Naïve” is set to release on December 3, 2019. Published by Chutter Hill Publishing, the book is available for purchase on Amazon. “Is Micah a modern-day Mr. Ripley, or is he not?” asks Celia S., a reviewer from Seattle. “What a ride trying to figure it all out.” This isn’t the only rave review “Naïve” has received. So far, all reviews have been five-star, including one from Dr. Melissa Caudle, best-selling author of “The Keystroke Killer.” Caudle says, “It’s hard for me to read other thrillers after writing several of my own. I tend to figure things out long before I get to the end. Not with this book. It held me spellbound from the beginning to the very last word. It holds the potential of becoming a best-seller.”

According to the author, Charles Royce, his new mystery suspense thriller novel Naïve features Micah Breuer, an accomplished art director living in present-day New York City. Royce told Caudle that his protagonist, Micah, is a loner. Royce says, “Micah is a southern Baptist preacher’s kid who struggles with his homosexuality while portraying to the world he is perfectly okay. He’s beautiful on the outside but cannot reconcile his self-perceived ugliness on the inside. He is driven to be understood; yet, he doesn’t understand himself. So, his quest is futile. Hopefully, readers can relate to the feeling of being misunderstood and or worse, not understood at all. Rooting for the underdog is always a fun experience, especially when it’s potentially masked in something else entirely.”

According to the description on Amazon for “Naïve,” the book follows Micah, who is charged with his husband’s murder. When he comes home to find his husband, Lennox, lying naked in a pool of blood on their living room floor, he finds that Lennox has been brutally stabbed over thirty times but is still alive. Micah, in desperation, struggles to keep his husband alive, but his efforts fail as Lennox takes his last breath. Soon the police arrest Micah, and they formally charge him with homicide. The police, during their investigation, discover mysterious items at the crime scene, some suggesting a connection to the company he works for, while others point to an elusive heroin dealer known as Ghost. With a trial looming, Micah’s lawyer hustles to defend him. Together, they are catapulted into multiple dark realities of corporate corruption, Manhattan’s drug underworld, a questionable and overzealous prosecution, and the betrayal of a close friend who may have masterminded a murderous scheme that could land Micah in prison for life. As Micah wrestles with his naivete, his friends and enemies begin to question their own.

Royce faced many battles to write “Naïve,” including sobriety and drug addiction. He struggled, but successfully battled them both. What helped Royce was when he heard the words from Pete Wilson, former pastor of Crosspoint Church. Wilson told him, “When you think back to your original passions, the ones you had when you were a child, remember those passions are the ones that are God-given. Innate. Soul-born. They fill you up; they never tear you down.”

Royce told Caudle, “Those words inspired me. I was at crossroads, a place where monotony met discontentment, struggling with what was next for me. About that same time, a friend of mine, Kelly Oechslin, released her first book. I saw the light in her eyes, the pure unadulterated joy of presenting what she’d accomplished. Evidently, the universe was trying to guide me. It was like my childhood was whispering, “Hey, remember me?” The rest is history, as Royce prepares to launch “Naïve” on December 3, 2019. The book is available on Amazon. The eBook will be offered for a limited time at .99 cents beginning December 3, 2019 (the launch day), then gradually over the course of the week go back up to the regular price.

Born Charles (Chuck) Royce Hargett, Royce’s own life experience reminds him that Micah and Lennox inhabit a world he knows all too well — where superficiality meets authenticity, and where shadow meets light. For example, he’s written double platinum, Dove Award-nominated, #1 songs for the Christian music industry, then began drowning his demons in alcohol and drugs and has been sober now since 2006. He’s worked as creative director for entertainment’s most iconic business magazine, eventually opening his ad agency in NYC, then left it all behind to start a small southern bakery in his hometown. Most recently, he’s studied mental health diagnosis and counseling in a master’s degree program, and then wrote the mystery suspense thriller Naïve, a novel where the protagonist may or may not be a sociopath.

Currently, he’s a freelance creative director residing in Nashville with his partner of five years, who used to love him unconditionally; then he read Naïve and sleeps with one eye open.

Like Patricia Highsmith (Talented Mr. Ripley), he enjoys creating contemporary intrigue and suspense by examining extraordinary circumstances in ordinary lives, not by exploiting an LGBTQ angle, but by offering situations where some protagonists or antagonists happen to be gay.

With Naïve, Royce has jumpstarted a world where entertainment, fashion, and publishing collide with criminal justice, mental health, and modern corruption to entwine readers in a cascading trilogy of three novels, immersing them in a multi-continent, decade-long tale of murder, betrayal, corporate scandal, and revenge.

Royce is available for television, radio, podcast, magazine, newspaper, and blog interviews. Contact him below: 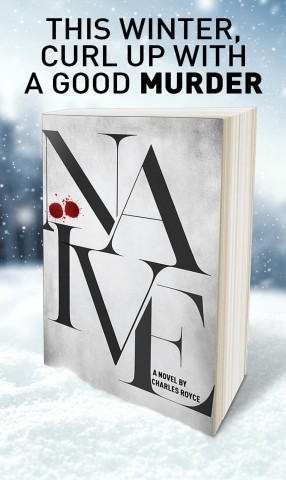 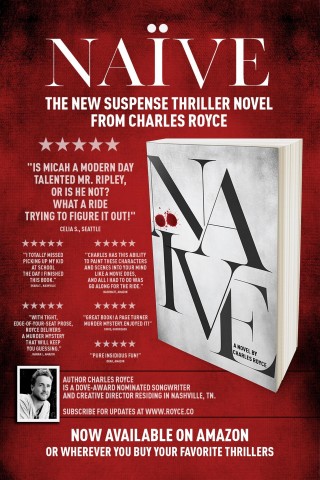