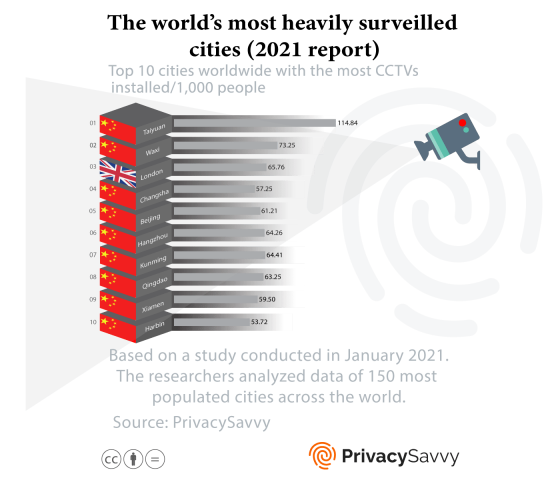 • Today, most cities worldwide are under surveillance with thousands to millions of CCTV cameras.

• China remains the most surveilled country in the world.

Since the introduction of CCTV systems in 1927, the number of surveillance cameras has significantly increased. Globally, an estimate of over one billion CCTV cameras exists today. The advancing technology has boosted its use, making them cheaper and powerful. This enables them to become more advantageous than before.

According to the fresh analysis of the most surveilled cities worldwide by PrivacySavvy, a digital privacy and security resource center, several cities worldwide are under heavy CCTV surveillance.

• China comprises 56% of all CCTV cameras in the world.

• China has 18 of the leading 20 most surveilled cities.

• Hyderabad has the highest density of India’s CCTV cameras.

• Taiyuan has more cameras per 1000 people than any other city globally.

• London is the third city in the most surveilled cities list.

Singapore, Russia’s St. Petersburg, Iraq’s Baghdad city, and Los Angeles in the US are among the top 50 most surveilled cities globally. Concerning CCTV density, Tokyo in Japan leads with 3.04 CCTVs/1000 people in most populated cities. India’s Delhi city follows with 35.81 and China’s Shanghai with 41.62. Typically, most populated cities are not highly surveilled, according to the study.

China is the most surveilled nation worldwide

In 2019, the IHS Markit report suggested that about 54% of the world’s CCTV cameras are in China. With an increase to 56% today, according to PrivacySavvy research, china has over 500 million cameras. Notably, nine out of the top ten most surveilled cities are in China. For instance, Taiyuan has nearly 4.2 million cameras with 3.9 million people, meaning eight people per camera.

Here are the most surveilled cities globally on the number of CCTV cameras per 1,000 people (under most recent population numbers), according to PrivacySavvy:

UserTesting Welcomes Two New Members to Its Board of Directors