A Rising Art Superstar Emerges From The Pandemic 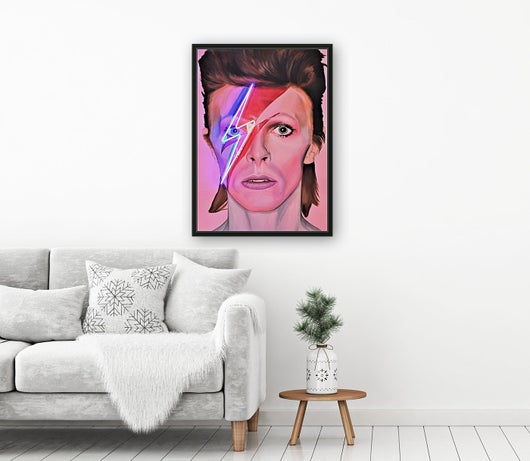 During a year of unprecedented times in 2020, Will McNally decided to leave his job in the city to pursue his passion full time – and now, he’s on the road to becoming one of the art world’s major rising stars.

Between March and October 2020, the price of Will’s artworks skyrocketed in value by more than 58 percent, with his unique, vibrant portraits capturing attention around the world.

His work has been exhibited on both sides of the Atlantic, in addition to catching the eye of countless art collectors. Now, Will has a 12-month waiting list for commissions, after painting previous pieces for international galleries, professional footballers, major entertainment industry figures, and even royalty.

Will has been dubbed “the new Banksy” by several critics, with his trademark bright neon portraits of iconic celebrities and movie characters also earning him comparisons to Andy Warhol.

His innovative, neon-infused portraits of the Joker (as portrayed by both Joaquin Phoenix and Heath Ledger) are now must-have collector’s items after selling out last year. And while many of his prints and canvases remain available, these sold-out works remain in high demand in the art world, with collectors eager to snap up these rare McNally’s as he becomes more of a household name.

It’s no surprise that his pop culture-inspired artwork has attracted the attention of Hollywood, with major commissions for movie studios including Universal. He has also made headlines with a controversial piece in a recent edition of Playboy Magazine, putting the Queen in the iconic Playboy bunny ears.

In other recent works, he’s reimagined Mario and Luigi as the hitmen from Pulp Fiction, and Space Jam’s Lola Bunny as Margot Robbie’s character from The Wolf of Wall Street. Will’s work is beloved by both art collectors and pop culture obsessives due to how it takes world-famous celebrities, movie characters, and public figures, and reinvents them with his distinctive sense of humour. Now, he’s currently working on a new collection of superhero-inspired works, with pieces influenced by Superman and Batman recently showcased on his Instagram page.

Will started painting as a teenager but kept his hobby a secret out of fear that his friends would consider him uncool. He even kept his passion a secret from his family and shocked them when he agreed to paint a piece that would be auctioned off for charity.

That first piece was a portrait of the Kray Twins, and it immediately sparked Will’s distinct style: putting a subversive twist on portraits of famous faces. Years later, and he’s now living the dream he’s had since he was a teenager: painting full time while his work keeps increasing in value.

With a highly anticipated new collection on the way, and rising demand for personal commissions, this is just the start of Will’s story…

US Auto Spa Affirms the Benefits of Ceramic Coating

Is Telehealth Effective? FYZICAL Therapy and Balance Centers Have the Answers.

Get the best quality rhinoplasty service with Dr. Kim Patrick Murray to give a deserved nose.

Why Should You Consider Collaborating With Micro-Influencers?