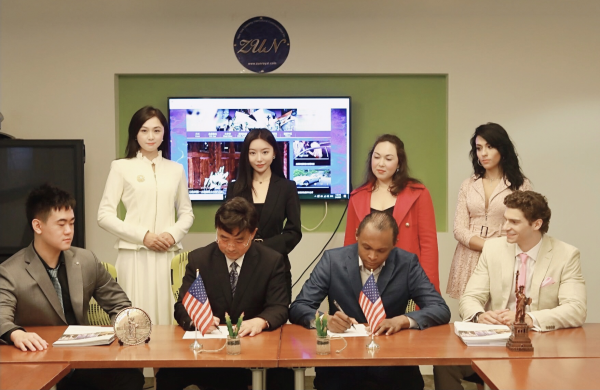 After ZUN Royal Group invested in the Hollywood Christmas comedy “The Farmer & The Belle: Saving Santaland” and it turned out to be a big hit in market, this company invested in a new film, “Donut Kid”, a planned 100-minute feature directed by the young film producer and director, Alexander Bok. This is a new children fantasy film, after “Harry Potter” heated the market of this genre.

“We have seen so much talent that Alexander Bok has exhibited in his previous works. We believe our partnership will bring us new success.” Said Raymond Chen, the representative of ZUN Royal Group, at the investment agreement signing ceremony on May 4th, 2021.

“America and China are the two biggest film markets, it is very exciting to bridge them.” Held Jonas Hu, the sole proprietorship founder & CEO of Beijing Shinshot Media Co., Ltd., who attended the ceremony.

Alexander Bok is a film producer and director. From a huge passion in telling stories from a young age where he would write stories instead of essays to school, he knew NYC would be the next step so he left his home country in Africa a decade ago, to arrive in the Big Apple with only sixty dollars and a dream to bring his stories to life. He is now building his cinematic universe called Bok Universe and so far has written, produced and directed many short films and two feature films, “Eclipse: The Rise of Ink”, and “Dragon: The Weapon of God”.

David Arquilla, the actor playing the role Sam, also attended the signing ceremony. Sam is the team leader gathering superheroes in this film. David is a working actor based out of New York City who feeds off the energy of the City. In addition to being a leading man in both dramatic and comedic roles in movies such as “Swipe” and “Justice On Trial”, David also played the role of superhero Sam Pikows in the film “Eclipse: The Rise of Ink” directed by Alexander Bok. All these films can be seen on Amazon Prime Video. In addition, David has acted in television shows like the sitcom “The Other Two” on Comedy Central, and toured the country in national theatre production “Justice On Trial”.

Also attended were Anya Winchester, who plays Sarah in the film, and Sophia Gutchinov, who plays Gina. Anya Winchester is an NYC based actress, model, streamer, and cosplayer. Originally from Saint Petersburg, Russia, Anya moved to America when she was 14. As someone with a constant thirst for new knowledge, Anya is currently pursuing a degree in Graphic Design. The role Sarah that Anya plays in this film, is a powerful CEO in urge of developing super power drugs.

Sophia Gutchinov is a multi-ethnic actress, performance artist, comedian, model, and voice over artist. Currently she can be seen in two Minute Maid commercials, heard in “Marvels” by Marvel, in a Walmart commercial, and in her self-produced comedy.

An especially eye-catching talent starring in this film is Scarlett He. She currently is studying at the New School University, majoring in Acting for Film. She has been awarded in many international beauty pageants. After being trained for only three months with the Talent Training Program in ZUN Royal Group, Scarlett He has taken a principal role in a 100-minute feature film, we have to admit that she truly has a promising and bright future in film performing.