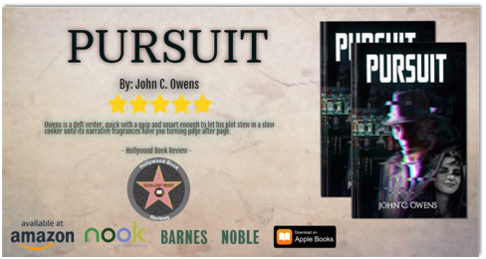 New York, NY – Detective Lou Decker’s life is in disarray. Since the death of his wife, questionable actions on the job as a detective have led to his suspension. Alcohol fuels his dissolution. He lacks family ties, and the only person of importance in his life is his sister. Decker is then suddenly challenged by the disappearance of his sister at the hands of a religious cult. In his attempt to rescue her, Decker comes face-to-face with the startling reality and power of supernatural evil. Along the way, he encounters a host of characters, both mundane and supernatural, who will impact this search and life indelibly.

“Pursuit”: a riveting read that chronicles the pursuit of Detective Lou Decker when his sister gets kidnapped by religious cultists, leading him to experience spiritual warfare that tests his faith. “Pursuit” is the creation of published author John Owens, an emergency medicine physician and a contributor to the All-Sports Bulletin and Hockey Weekly.

As quoted by Hollywood Book Review “Owens is a deft writer, quick with a quip and smart enough to let his plot stew in a slow cooker until its narrative fragrances have you turning page after page. When you do, you’ll find not only an exercise in police procedurals, but also a walk through the wilds of supernatural terror, religious debate (folded nicely into the sinew of the story), native American sweat lodges, and spooky coincidences (the Viet Nam item I mentioned earlier).

Currently, the book is under the representation of Mark Alvarez and has been receiving good recommendation and reviews from Hollywood. “It is a great honor to represent book like this. An exciting and must read book for everyone” as per his agent Mark Alvarez. As of this writing, he and his team is working with the needed requirements for Hollywood acquisition process.

John C. Owens MD has had a long career as an emergency medicine physician, practicing both in the Detroit area and in the hinterlands along Lake Michigan. He holds degrees from Purdue University and the University of Michigan. John served as Van Buren County assistant medical examiner for ten years, encountering many forms of death and homicide. His exposure to mayhem was supplemented by his tenure as team doctor for the Detroit Junior Red Wings. John has long had an interest in writing, beginning with editing and writing for newspapers in high school and in college. As an adult he has been a contributor to Hockey Weekly and the All-Sports bulletin. This book is Dr. Owens’s first novel.

The Only Son of an Atomic Engineer: My Journey From Playful Beginnings To Published Writer