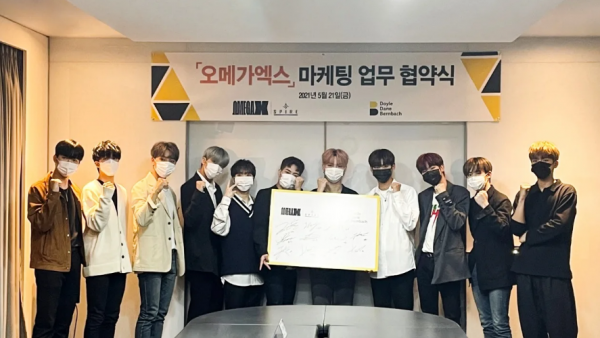 ‘Omega X’ heads in the right direction to globalize K-pop with one of the world’s largest advertising companies.

DDB Worldwide is one of the world’s largest advertising agencies. A strategic partnership with DDB Korea is expected to accelerate Omega X’s growth and spur the group’s global exposure.

Omega X members have been actively communicating with their global fans through the reality show “Loading – One More ChanX,” which airs on their YouTube channel (youtube.com/c/omegax_official). Last Monday, Omega X was appointed as the new honorary ambassador of Jeju Island by the Jeju Tourism Association.

Spire Entertainment CEO Seong-Woo Hwang expects the partnership would give synergy between Omega X and DDB Korea. “We look forward to Omega X’s new challenge of entering the global K-pop market with the help of DDB Worldwide, one of the largest marketing communication networks in the world,” Hwang said.

Omega X is an 11-member K-pop boy group set to debut this year. Omega (Ω), the last letter of the Greek alphabet, symbolizes a new beginning and dreams, while the alphabet X denotes the end. Combined, Omega X refers to the band members’ wish to stay with the fans from the beginning to the end. Fans can learn more about Omega X on their reality show “Loading – One More ChanX.” Episode 9 airs tomorrow at 9pm KST on YouTube and VLive.