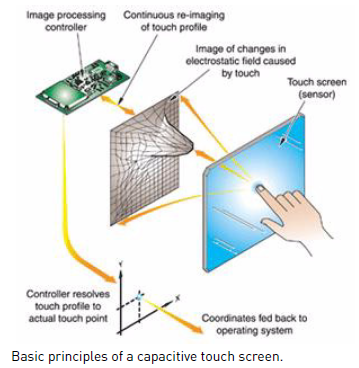 Capacitive technology touch panel CTP (Capacity Touch Panel) uses the current induction of the human body to work. The capacitive screen is a four-layer composite glass screen. The inner surface and the interlayer of the glass screen are each coated with a layer of ITO (Nano Indium Tin Metal Oxide). The outermost layer is a protective layer of silica glass with a thickness of only 0.0015mm, and an interlayer ITO coating. As the working surface, four electrodes are drawn from the four corners, and the inner ITO is the screen layer to ensure the working environment.

When the user touches the capacitive screen, due to the electric field of the human body, the user’s finger and the working surface form a coupling capacitor. Because the working surface is connected to a high-frequency signal, the finger absorbs a small current, which flows from the four corners of the screen. The current flowing through the four electrodes is theoretically proportional to the distance from the finger tip to the four corners. The controller calculates the position of the four current ratios accurately. It can reach 99% accuracy and has a response speed of less than 3ms.

The touch technology of the projected capacitive panel The projected capacitive touch screen is to etch different ITO conductive circuit modules on two layers of ITO conductive glass coating. The etched patterns on the two modules are perpendicular to each other, and they can be regarded as sliders th at continuously change in the X and Y directions. Since the X and Y structures are on different surfaces, a capacitor node is formed at the intersection. One slider can be used as a drive line, and the other slider can be used as a detection line. When the current flows through one wire in the drive line, if there is a signal of capacitance change from the outside, it will cause the change of the capacitance node on the other layer of wire. The change of the detected capacitance value can be measured by the electronic circuit connected to it, and then converted into a digital signal by the A/D controller for the computer to perform arithmetic processing to obtain the (X, Y) axis position, and then achieve the purpose of positioning.

During operation, the controller sequentially supplies current to the drive line, so that a specific electric field is formed between each node and the wire. Then scan the sensing line column by column to measure the capacitance change between its electrodes, so as to achieve multi-point positioning. When a finger or touch medium approaches, the controller quickly detects the change in capacitance between the touch node and the wire, and then confirms the touch position. This kind of axis is driven by a set of AC signals, and the response across the touch screen is sensed by electrodes on the other axis. Users call this ‘cross-over’ induction, or projection induction. The sensor is plated with X and Y axis ITO patterns. When a finger touches the surface of the touch screen, the capacitance value below the touch point increases according to the distance of the touch point. Continuous scanning on the sensor detects the change in capacitance value. The control chip calculates the touch point and reports it to the processor.