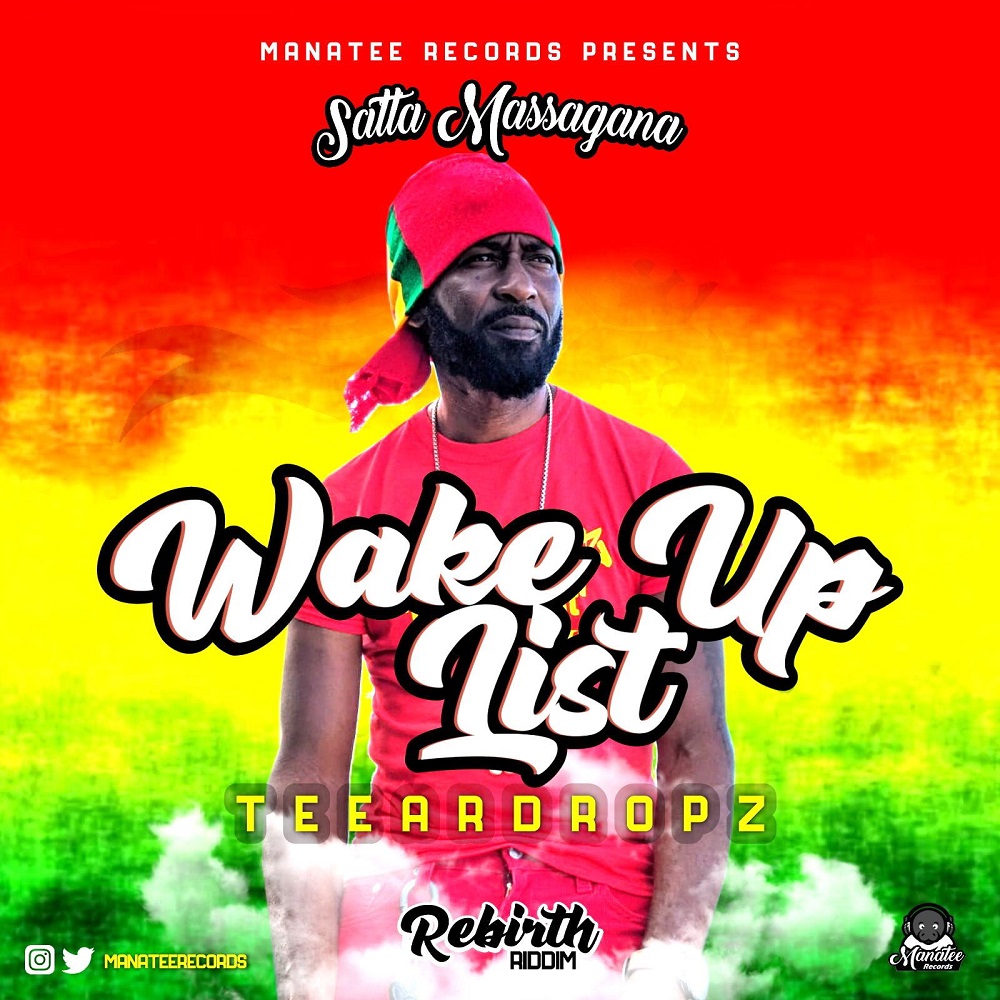 According to Teeardropz aka Jonathan Brown, “Waking up in the morning to feel the early morning wind blowing against your face, and smelling the blossoms from the plants, has no greater feeling to that”. Teeardropz with the “z”, is lamenting the goodness of being alive, even though the World is enduring a Global crisis due to the pandemic and other global conflicts. He is set to release the audio and visuals for his smashing new hit song, “Wake Up List”, on all common digital platforms on April 15th, 2021.

The song is produced by USA-based Manatee Records led by Calvin ’Doc’ Flowers, which had a successful run in the reggae community with hit records in Jamaica recording Lady saw, Capleton, Sizzla, Luciano, Sean Paul, Jah Cure, and Vybz Kartel in the early 90’s. The latest Riddim Album release of “Satta Massagana Rebirth”, which is a compilation of global reggae artists from Jamaica, Trinidad, Belize, Argentina, Mexico and the USA. The song “Wake Up List” is receiving heavy rotation on all local radio stations as well as many global internet and commercial radio stations, including New York’s #1 Urban Music station, Hot 97 with ‘Body Konders’.

Teeardropz said he’s celebrating life, from the coming out until he lays his head to rest. He added, “The inspiration for doing this song is just loving and celebrating life. It’s been grateful to me from “mi rise up” in the morning that means I’m rich.” Teeardropz, since the pandemic came on, has turned up his spiritual and cultural roots side to his music.

In June 2020 he voiced and released the song “Trodding” which was based, as he states, on the “wrong energy happening in the world, and myself trying to find a peaceful place or peaceful energy”. He also returned back to the soil in his community of Jackson town, Trelawny where he began his hand at farming.

His music credibility is picking up for this artist with the hot new single of “Wake Up List”, and with more promotions and marketing of the single throughout Jamaica and the rest of the reggae world. TeearDropz has several other songs in his catalog including a local hit “Fast Food” which catapulted him to be heard on Jamaican radio, but it is the new song on the “Satta Massagana Rebirth” riddim, that he feels has turned his career upwards towards having a hit record on Jamaica’s reggae music charts.

Teeardropz aka Jonathan Brown is a Jamaican reggae artist, who has been working unseemingly to advance his musical career over the past 20 years. His early contact with Manatee Records in the early 1990’s was instrumental after meeting the producer, Delon Reid who was responsible for many of the hit records from the then upstart reggae labels during that time. TeearDropz was given the opportunity to record his song “Party In Session ” on one of the label’s riddims which also featured a younger Vybz Kartel at the time.

His passion and conviction grew after seeing many artists throughout the country who made it to the big stage or abroad for shows and this is why Teeardropz remained faithful to his intuition and craft of producing and voicing on local projects. His songs are usually influenced by what is happening in the world, Jamaica, and in his life. For his 2020 song “Trodding”, produced by the late Barry OHare, he was invited for interviews on CVM at sunrise, TVJ, E Buzz – Irie Fm, E Blaze – Fame FM, Sun City Radio, and The Observer.

His latest releases on the Manatee Records imprint “Wake Up List” on the Sattamasagana Rebirth Riddim, produced by Manatee Records and Silva Sounds, has been buzzing on Jamaica radio waves over the past 2 months and is being heard currently on Irie FM, HITZ FM, ZIP FM as well as many internet radio stations globally.

The song was premiered more recently on Hot 97 in New York by Bobby Konders and Massive B and in the #1 Music Radio Market in the USA as one of the hottest singles to be released more recently. Other global radio stations are adding the “Wake Up List” to their playlist in the UK as well as on radio stations throughout Africa and the rest of the Caribbean and Canada. His other single World Order is produced by Devario Production.

The reunion with TeearDropz and the manatee label has been an inspiration to both himself and the President and CEO of Manatee Records, Calvin “Doc” Flowers since he first voiced on a Riddim on that label in the early 1990’s. The reunion is as if the past years since he voiced “Party in Session”, were compressed to days as his acknowledgment by Jamaican fans has increased since the “Wake Up List” hit the airwaves. TeearDropz is currently finishing songs on several other Riddims including “Yellow Tape” Riddim which will be another collaboration between his Countryside Music and Manatee Records.

How did you come by your stage name?

I coined the name “Teeardropz” as my entertainment name because I find it necessary to help others who need help. I am very emotional and I can tear up easily if I see or hear of emotionally pressed news or events.

When did you discover your love for your craft and what made you realize you wanted to pursue a career in it?

Growing up in Jamaica is not only exciting for life but also survival for life. I was always involved with music especially with the songs being played on the radio. The different types of reggae music especially roots and culture as well as dancehall music were the main genres I was exposed to growing up. My family and friends have all emphasized my love perform songs thus I became involved with hanging around the sound systems and disk jockeys growing up. After high school, I became more involved with pursuing music as a career and have devoted my time and money as such.

To what or whom do you accredit your sense of style?

My style and energy on the stage reflect how I am in my daily life, smooth and suave. In my teenage years, I also loved to dress and it is not coincidental that I love pastel colors. Today everyone knows my summer look with every color from white tees topink or a purple color to convey my sense of confidence.

On your current project, how did you come up with the concept?

I was given the opportunity by Manatee Records, a major record label throughout the 90’s, and one I was familiar with, asked me to jump on the Satta Massagana Rebirth Riddim with my style and skills. I had forgotten about the riddim until the CEO, Calvin Flowers, called to see how I was progressing with my song. At that time I had not recorded but shortly after, I went to the studio and came up with this hit “Wake Up List”.

My work ethic is superior to all my peers and I respond to the challenges of life especially ones that artists may encounter while attempting to pursue my dream. I am dedicated to my craft and have devoted all my monies and time to the business.

Are you the best at what you do in your opinion?

Definitely. I answer to known.

What are your plans for the near future?

I am currently working on the record “Wake Up List” and look forward to getting this song on the charts in Jamaica as well as globally. My other song “Trodding” did well in the music communities but the “Wake Up List” is doing well. We have several other songs on deck to give to my fans so look out world, here is “Teeardropz”.

Is there anyone you’d like to thank, any shout outs?

I would like to shout out all my family and friends who supported my music throughout this process of becoming a superstar reggae artist. I also want to thank the many producers and radio DJs who have supported my records and songs over the years. Finally, I would like to thank Calvin “Doc” Flowers, the President /CEO of Manatee Records who gave me the opportunity to voice a song on this powerful composition.

Although the “Satta Massagana” song was made into iconic status by the Abyssinians in the early days of the definition of reggae music which followed Ska the dominant type in those days, the current re-production of this globally known iconic tune for the communities globally, this new riddim gives me the ok to be myself as I exhibit my skills and vocal style in bringing the song “Wake Up List” to the masses.

How can fans find you?

My music can be found on all music outlets including Spotify, Amazon, Itunes, Apple, Tidal, and Deezer by searching for Teeardropz.

Email me at – Countrysidemusic@gmail.com for Booking, features, Dubplate, and shows.

What suggestions do you have for other artists like yourself?

My suggestion to other artists is that they should not give up their dreams to become successful artists. Although many times one may not believe they can make the cut, I am a testimony that things do happen regardless of how long one may try. Stay steadfast and push on but also believe that “When I Wake Up in The Morning, I know I Am Rich”.

FOR MORE NEWS AND ARTICLES, CONNECT WITH US ON MUZIQUE