The Euro Cup “non-official” anthem is out! Go Champions! a new song by Simonne, is hitting the airwaves soon. Go Champions! is the new title by female artist, Simonne, and produced by Mr.RAZ of VAM-United Records. The new song is made for the upcoming 2021 Soccer European Cup. According to Go Champions! producer, Mr.RAZ, the song, which is lives under the motto of “The show must go on”, is a perfect match with perfect timing for the upcoming Soccer Euro Cup. The new music comes with an up-tempo and can easily be played in clubs, pubs, and lounges. Its harmonies and warm vocals also make it a valid choice for all music redactors that choose to play it on the radio during the World Cup and even long after.

While announcing the release of the single, Mr.RAZ and Simonne said that they have also created a special package addressed to DJs with a different long version beat, making it perfect to mix on playlists and playsets. According to Mr.RAZ, those who would like to have it can write an e-mail to VAM-United Records officials with their DJ credentials at: Office@vamunited.de 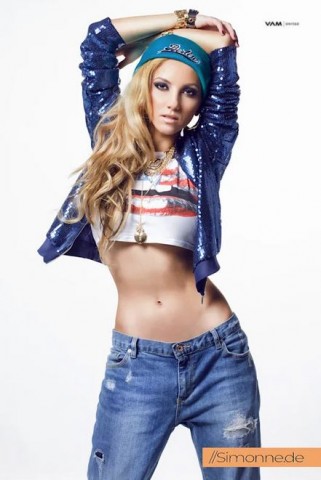 Simonne is currently working on three brand new songs with Mr.RAZ that are expected to be released later during summer this year. “The female artist is no stranger to the music business world and with this new collaboration, she has made a strong appearance, leaving us under the impression that she is back and more powerful than ever. She just can wait to be on various stages around the world,” said Mr.RAZ while adding that VAM-United Records is already impressed, and they are sure similar reception will be registered out there.

According to Simonne and Mr.RAZ, the song will be available on all major streaming platforms like Spotify, Deezer, Amazon Music, Apple Music, and Tidal, among others, from 28 May 2021.

VAM-United Records’ representative also added that Simonne will be doing live shows later in the summer. “The Go Champions! artist will be available for live performances starting this summer,” said VAM-United Records representative while urging those that enjoy live shows to make their bookings early. For bookings, people are encouraged to visit her website, which will be available soon, or write an email. They can also make bookings through https://vamunited.com

VAM-United Studios was founded by Mr.RAZ and mainly records Hip-Hop and Rap music with local artists in the Saar-Lor-Lux area in Europe. The quality and professionalism at VAM-United Studios have seen it booked throughout. Since its inception, VAM-United Records has had numerous releases worldwide with artists like KAMM, Killa E, Chabibis, Kevin Stvxx, Alan Stern, Grandfathers Skin, and now Simonne.