The Dark Side Behind Popular Live-streaming: Mukbang Have one heard about Mukbang before? As one of the most popular genres of live-streaming, there are more than millions of followers who enjoy watching influencers eat in front of the cameras. Some people said they do relax themselves from Mukbang. However, Mukbang has a dark side behind the scenes. The most critical problem is about health. Those extra-large quantities and high caloric intakes may cause serious health issues. Some mukbangers have to spit food out after finishing the livestream, because they want to keep healthy or remain in good shape, which is pretty unhealthy.

Another major problem is about waste. Overeating cannot make your body earn more nutrition. Contrary to that, over-consumed food is a kind of waste that has a negative influence on the society. Luna Jiang, an artist from New York, created a sculpture artwork “Tu Zi” to reflect the critical situation of mukbangers. She would love to raise the public’s awareness of the violence behind Mukbang, and give them more space to discuss these social issues.

“Tu Zi” is a series of biomorphic ceramic sculptures in different shapes based on growing fungus or an organism. Each of them contains holes that share a similar look to a human mouth. “When I first designed it, I made some really cute rabbits’ models with pink color. However, by modifying the appearance of the artwork, I eliminated the pure cuteness in the original design and emphasized the conflict behind the cuteness.” Luna stated. Compared to pure cuteness, Luna added some discomfort to “Tu Zi”, because she hopes people will notice that there are some violent factors behind cuteness. This artwork intends to reveal a secretive group of influencers, who are being mukbangers. This group of people can call themselves ‘Tu Zi’ – ‘rabbits’ in Chinese pronunciation. The cutesy name in fact has a real dark connotation, because “Tu Zi” could also mean “vomiters”, which is the hidden meaning of its title. The behavior of vomiting and purging has become a secret for mukbangers.  After turning off the cameras, they hid behind and let the undigested food pour out of their mouths. “The public is still unaware of these diet issues and health problems of mukbangers. “The reason why I picked rabbit as the core element of “Tu Zi ” is that I want to increase people’s awareness of the situation of mukbangers and raise this social issue.” Luna said. 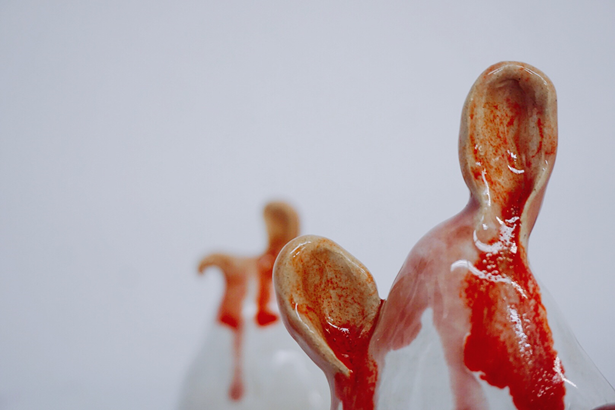 Just like “Tu Zi”, most of Luna’s artworks mainly focus on discussing the real meaning of “cuteness”. She loves to express the contrast between cuteness and violence. The meaning behind the attractive appearance can be viewed as Luna’s mature artwork theme and her personal artistic style. “Personally, I prefer to get ideas from my own life experience and then go deeper into the social issues. At the early stage, my artwork focused more on visual presentation, which is relatively simple. Nowadays, I pay more attention to the deep-level expression behind the visual presentation.” Luna explained.

“Cuteness” is not a positive word for her, because she feels like that “cuteness” kind of equates to weakness. Actually, people are more willing to protect those small, easily injured, and weak stuff, and call it “cute”. And behind the word, there is also a stereotype and a desire for control, which is the darker side behind cuteness. Most of the paintings and sculptures she created before are small and cute, but Luna wants to convey that there is someone who may look cute, but they do have some hidden personalities that are unknown to most people. Luna hopes that people will explore and redefine the deeper meaning of “cuteness” through her artworks.

“Mini House” is another best representation of Luna’s artist statement. Visually, “Mini House” shows a smaller world from a novel perspective. Through the unreal and dreamy environment she has created, the audience has a space to discuss the relationship between her artwork and reality. “I would like to create a special space for my audience. They may discover the world from different views and find out more facts about themselves. This is the reason why I got a chance to gain a deeper understanding about myself. I hope that other people could also get inspiration from my artwork.” Luna told.

New Method of Acupuncture for Pain Developed by Dr. Ezzati of Balance Within Acupunture

New Method of Acupuncture for Pain Developed by Dr. Ezzati of Balance Within Acupunture