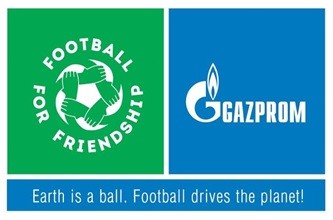 On 24th and 25th May, the participants of the 2021 Football for Friendship eWorld Championship from over 200 countries contested their qualifying matches in 32 teams organised into eight groups. The semi-final and final will take place on 29th May. The Championship is one of the highlights of this year’s Ninth Season of the Gazprom International Children’s Social Programme Football for Friendship (F4F).

The teams “Argali”, “Bearded Vulture”, “Crested Ibis” and “Stoat” with Young Players from 19 different countries have qualified for the semi-final. The 2021 Football for Friendship eWorld Championship is being contested in a digital format on the multiplayer simulator Football for Friendship World (F4F World), which was specially developed for F4F and is available free of charge in 27 languages on MS Windows, Apple macOS, Android and iOS.

The Open Draw for the eight groups, which were made up of a total of 32 International Teams of Friendship, already took place back at the end of April. Boys and girls from over 200 countries were able to apply to take part or were proposed by their national football academies.

The International Teams of Friendship have names of animal species that are at the brink of extinction, for example “Chinese Alligator”, “Red-legged crow”, “Dusky shark”, “White rhinoceros”, “Pallas’s cat”, “Star-nosed mole”, “Woodland owl” and “Western long-beaked echidna”. This practice was first introduced in 2018 to draw attention to the idea of environmental protection and biodiversity.

In the International Camp of Friendship with the theme “Uniting friends – uniting the world”, the children had already prepared intensively for the 2021 Football for Friendship eWorld Championship under the guidance of Educators and Young Coaches.

At the Camp, which was held on May 15-23, the kids exchanged ideas and experiences in workshops and other online formats on a range of topics, including the Nine Values of F4F: friendship, equality, fairness, health, peace, devotion, victory, traditions, and honour. Irrespective of their country of origin, their gender, their ethnicity or their language, the Young Participants were able to get to know each other better and to make friends.

The winners of the 2020 Football for Friendship eWorld Championship were the team “Granular salamander”, whose players came from Bosnia Herzegovina, Kazakhstan, Latvia, the United Arab Emirates, Russia, and Turkey.

Since December 2020, “F4F World” has been available outside of the eF4F competition free of charge to anyone interested. “F4F World” was developed by the company DataArt.

Rohit Peeris, Sri Lanka: “After playing with my wonderful team, I have now made contact with 100 countries in the F4F World game. I am proud and glad that I have been able to play with kids from all over the world. I also have been able to interact with several of them through classes & sessions. It is a truly unique opportunity. I look forward to the day that the F4F World Championship will be held offline so that I can meet the kids in person.”

About Football for Friendship

The International Children’s Social Programme Football for Friendship has been organised and run by Gazprom since 2013. Over the previous eight seasons, more than 15,000 children and young people from 211 countries and regions have taken part in the programme. And more than 6,000,000 people support the project.

Boys and girls aged between 12 and 14, including children with disabilities, participate in the project as “Young Players” or “Young Journalists”. Young Players represent different countries and cultures. They show that nationality, gender, and physical abilities aren’t a barrier to becoming a team. Young Journalists report on the Football for Friendship projects in the International Children’s Press Centre. All former participants later become “Young Ambassadors” for the programme and continue to share their experience and to promote the universal human values which Football for Friendship stands for: friendship, equality, fairness, health, peace, devotion, victory, traditions, and honour.

UEFA, FIFA, football federations and the world’s leading football clubs, international charity foundations, famous athletes, politicians, and artists support Football for Friendship. The project has received over 60 national and international awards in the field of social responsibility, sports, and communications, including two GUINNESS WORLD RECORDS™ titles for the most nationalities in a football training session in history and the most users in a football video hangout.

Say Goodbye to Fashion Dilemmas and be Saved By Lace