The report “Insect Protein Market by Insect Type (Crickets, Black Soldier Flies, Mealworms, Ants, and Grasshoppers), Application (Food & Beverages, Animal Nutrition (Aquafeed, Pet Food, and Poultry Feed), Pharmaceuticals & Cosmetics), Region – Global Forecast to 2025″, The insect protein market is projected to reach USD 1,336 million by 2025, from USD 144 million in 2019, at a CAGR of 45.0% during the forecast period. The market is driven by factors such as the shift in consumer preference from animal protein to alternative protein such as insect protein due to the increased concerns over future sustainability, and the increased public and private support for new insect protein development projects in both developed and developing economies. 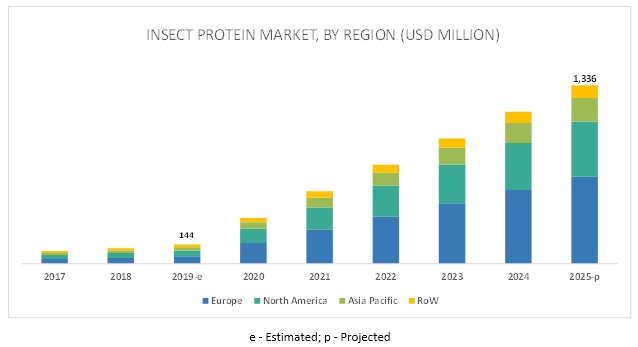 By application, the food & beverages segment is projected to grow at the highest CAGR during the forecast period

Due to the rising necessity of protein alternatives among food & beverage manufacturers to fulfill the increasing demand of consumers, the adoption of insect protein has been growing in the food & beverages segment. Moreover, due to high population growth, the consumption of animal products such as meat, egg, and milk continues to rise, which environmental sustainability a challenge. However, around 2,000 insect species are already consumed by humans and domestic animals across the globe as part of their regular diet, due to their high protein content, favorable fats, minerals, and vitamins. This has provided opportunities for food producers to enter this market and launch various products such as protein bars, snacks, whey protein, mealworm cookies, cricket pasta, honey caterpillar croquettes, mixed insect snacks, and candies based on insect protein.

In most European and North American countries, human consumption of insects is very low and often considered culturally inappropriate or even taboo. However, considering the growing population in the world and the increasing demand for production of traditional pork, beef, and chicken meat, insects are seriously considered as a source of animal protein. Thus, in these regions, since the acceptance of edible insects is low, manufacturers have been introducing insect protein powder-based products in the form of protein bars, protein powder, pasta, and bakery products. Since the insects are not directly visible to the consumers, such products are easily accepted. Thus, many companies manufacturing insect protein powders have been emerging and are expanding their production capacities in North American and European countries.

Insect protein is majorly used in animal feed; however, the demand for insect protein for human consumption is projected to grow at a high growth rate due to the increasing health consciousness among consumers. Insect protein in feed products witnesses a growing demand in North America, Europe, and Asia Pacific. However, the lack of proper regulations regarding the use of insect protein in the feed industry can be a major hindrance to the growth of the industry.

Insect protein finds major applications in the food and feed industries, and hence, profiling of major manufacturers of insect protein products for both food and feed applications has been covered in this report. The key companies in the insect protein market for the food application include Aspire Food Group (US), EntomoFarms (Canada), Protifarm (Netherlands), Jimini’s (UK), Chapul Cricket Protein (US), and Swarm Nutrition GmbH (Germany), while key companies in the feed application include AgriProtein Holdings Ltd. (South Africa), EnviroFlight LLC (US), Innovafeed (France), Ÿnsect (France), Hexafly (Ireland), and Protix (Netherlands). These players are undertaking strategies such as new product developments and launches and divestments to improve their market positions and extend their competitive advantage.

Our 850 fulltime analyst and SMEs at MarketsandMarkets™ are tracking global high growth markets following the “Growth Engagement Model – GEM”. The GEM aims at proactive collaboration with the clients to identify new opportunities, identify most important customers, write “Attack, avoid and defend” strategies, identify sources of incremental revenues for both the company and its competitors. MarketsandMarkets™ now coming up with 1,500 MicroQuadrants (Positioning top players across leaders, emerging companies, innovators, strategic players) annually in high growth emerging segments. MarketsandMarkets™ is determined to benefit more than 10,000 companies this year for their revenue planning and help them take their innovations/disruptions early to the market by providing them research ahead of the curve.

MarketsandMarkets’s flagship competitive intelligence and market research platform, “Knowledgestore” connects over 200,000 markets and entire value chains for deeper understanding of the unmet insights along with market sizing and forecasts of niche markets.

Scope of the Report