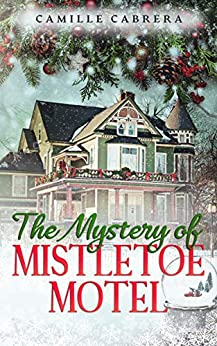 The Mystery of Mistletoe Motel follows two sisters as they end up in a hair-raising predicament, struggling to run their family-owned motel with dwindling finances and increasing potential supernatural encounters.

Camille Cabrera’s new novel, The Mystery of Mistletoe Motel, is currently available for pre-order. The author’s latest work is a cozy mystery Christmas novel that chronicles the efforts of two sisters as they endeavor to save their family legacy after a string of unfortunate events.

Scheduled for release on the 23rd of November, the plot follows Lacy Pondwater, a promising accountant, who never wanted to own the Mistletoe Motel, but is forced to assume its management and place her own life on hold.

Lacy and Stacy scramble to keep the family business afloat on a constantly shrinking budget. However, the task proves challenging as the motel is in desperate need of repair and teeters on the edge of bankruptcy.

After a few too many glasses of wine and paranormal true-crime shows, Lacy embellishes the description of Mistletoe Motel online and includes Victorian-era haunts with the occasional ghost encounter. Shortly after, mysterious occurrences commence as patrons report hauntings and missing personal items. Are the strange paranormal experiences true or are guests simply creating their own stories?

The plot thickens when the sisters agree to allow a ghost-hunting television show to film the motel. Only a Christmas miracle will save the motel from bankruptcy, and Lacy from a life of fraud.

The Mystery of Mistletoe Motel will be available for purchase after its release at Barnes and Noble, Amazon, Kobo, iTunes, and more retailers.

Work From Home As a Freelancer on UJober