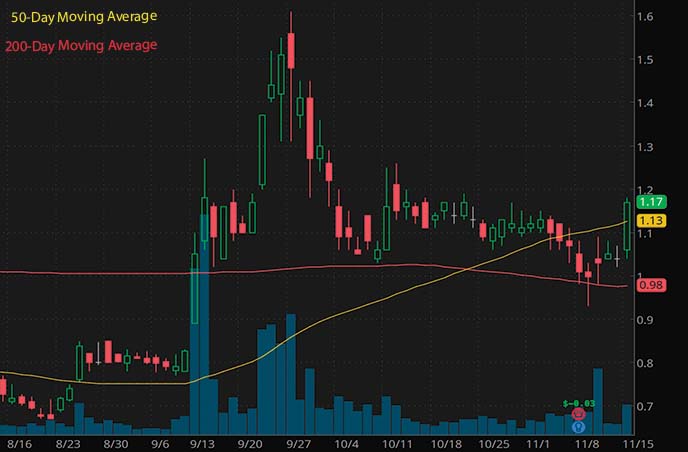 Need proof that markets are inefficient when it comes to pricing? Look no further than how AMMO, Inc. stock is trading after posting a blowout quarter accompanied with exceptional guidance. Shares are lower by about 5% despite a more than 9% surge after earnings were published. Blame the “sell the news” herd mentality for creating the expected short-term valuation disconnect. But, for those tempted by the short side of the trade, seller beware. AMMO, Inc. is hitting on all cylinders. For those who wanted AMMO shares on the cheap, take advantage.

Yesterday, AMMO posted excellent results for its FY2022 Q2 that ended September 30, 2021. In fact, they were stellar from every metric. Better still, they came with a gale-force tailwind, with AMMO management raising next year’s revenue guidance by 19% to $250 million. And if that wasn’t bullish enough, they also increased Adjusted EBITDA guidance for fiscal 2022 from $70 million to $80 million.

That’s not all. Nearly every financial metric was impressively higher. Net revenues increased 408% to $61.0 million, marketplace revenue was $16.8 million, the gross profit margin was 43% compared to 10.7%, and net income was $14.1 million compared to a net loss of $2.3 million in the comparative period.

Still hungry for the positives? AMMO posted a spike in Adjusted EBITDA to $24 million versus $0.4 million a year ago. As if the combination of all the above wasn’t already strong enough to send the stock soaring, consider that a revenue-generating tailwind comes built-in, with AMMO noting a backlog of $185 million at the end of the quarter. According to AMMO, that number fluctuates slightly. However, AMMO said that not a single client has canceled an order. Thus, visibility is about as clear and bullish as it can get.

Thus, to those selling the news- go ahead. It potentially makes shares cheaper for those that appreciate compelling value investment opportunities. This one in AMMO is too good to ignore. Management even said so. And those that follow AMMO know that the company habitually delivers on its intent and message. Thus, when they say that momentum remains very strong across its entire business, believe it.

The message is even more powerful when they have a historical precedent to back up its expectations. Its FYQ2 set another quarterly record that exceeded estimates for revenue and Adjusted EBITDA. And not only record-setting, but the company said that trends accelerated in the second quarter with ammunition revenue increasing 360%. In addition, the market is strong, and pricing power is on AMMO’s side.

Better still, its marketplace revenue growth is steepening, driven by increases in the number of bids, items sold, and average ticket amount. That’s coupled with significant increases in adoption rates for its new loyalty program. Margins continued to expand significantly as well, driven by growth in its marketplace segment and from scale-related efficiencies and capacity increases in its core ammunition business. In addition, AMMO announced another new U.S. military contract in September, updated its construction activities related to its new state-of-the-art Wisconsin plant slated for a mid- 2022 grand opening, and noted growth across the board, leading AMMO to again increase guidance.

Revenues Are Great, Earnings Are Better

The contributions from each led to Net revenues of $61.0 million, higher by 408% versus last year. Part of that increase came from continued strength in its ammunition business and incremental revenue realized from its transformational GunBroker.com acquisition completed earlier this year.

Breaking down the totals, ammunition sales totaled $40.2 million compared to $8.7 million in last year’s second quarter, increasing 360%. Marketplace revenue was $16.8 million for the quarter with no comparable year-earlier period, reflecting the closing of the GunBroker.com acquisition during the first quarter ending April 2021. Gross profit was $26.2 million in the second quarter versus $1.3 million in the year-earlier period, driven by solid growth in ammunition along with incremental revenue from its marketplace segment, which has significantly higher margins.

Notably, the Gross profit margin was 43.0% in the second quarter, compared to 10.7% in last year’s second quarter, due to the impact of AMMO’s higher-margin marketplace revenue. The second-quarter gross margin improved 30 basis points on a sequential basis, reflecting the rising mix of revenue contributions.

Again, for those measuring value on Adjusted EBITDA, AMMO posted a sharp rise, reaching $24.0 million in the second quarter of fiscal 2022, compared to an adjusted EBITDA loss of $0.4 million a year earlier.

Thus, shares trading lower shows just how imperfect a market can be. Apparently, the days are long gone of the buy quality and hold mentality. Warren Buffet is failing to leave his legacy, being overshadowed by fast money, professional day and swing traders that play with clients’ money like it has no value.

But, at the end of the day, that’s okay. What will never change is that fundamentals, earnings growth, and top management will always win out in the trading world. Valuations do eventually connect. Thus, while institutional investors may shake the tree on the retail class, expect them to return to scoop up shares of great companies that are making performance statements loud and clear. AMMO, Inc. will be one of them.

Hence, while long’s are disappointed that the very same investors entrusted to invest their money can sell on a financial update as strong as AMMO’s, with glowing guidance, know this- any decline in AMMO stock will likely be short-lived. There’s not a single part of the earnings presentation that should go underappreciated. Moreover, when AMMO says to expect the company to post upwards of $400 million in revenues with two years, believe it.

Bottom line- stay long. Day trade elsewhere and think about backing up the truck on any AMMO stock weakness. They have earned that consideration.

Disclaimers: Level3Trading is responsible for the production and distribution of this content. Level3Trading is not operated by a licensed broker, a dealer, or a registered investment adviser. It should be expressly understood that under no circumstances does any information published herein represent a recommendation to buy or sell a security. Our reports/releases are a commercial advertisement and are for general information purposes ONLY. We are engaged in the business of marketing and advertising companies for monetary compensation. Never invest in any stock featured on our site or emails unless you can afford to lose your entire investment. The information made available by Level3Trading is not intended to be, nor does it constitute, investment advice or recommendations. The contributors may buy and sell securities before and after any particular article, report and publication. In no event shall Level3Trading be liable to any member, guest or third party for any damages of any kind arising out of the use of any content or other material published or made available by Level3Trading, including, without limitation, any investment losses, lost profits, lost opportunity, special, incidental, indirect, consequential or punitive damages. Past performance is a poor indicator of future performance. The information in this video, article, and in its related newsletters, is not intended to be, nor does it constitute, investment advice or recommendations. Level3Trading strongly urges you conduct a complete and independent investigation of the respective companies and consideration of all pertinent risks. Readers are advised to review SEC periodic reports: Forms 10-Q, 10K, Form 8-K, insider reports, Forms 3, 4, 5 Schedule 13D. For some content, Level3Trading, its authors, contributors, or its agents, may be compensated for preparing research, video graphics, and editorial content. As part of that content, readers, subscribers, and website viewers, are expected to read the full disclaimers and financial disclosures statement that can be found Level3trading.com/disclaimer.

The Private Securities Litigation Reform Act of 1995 provides investors a safe harbor in regard to forward-looking statements. Any statements that express or involve discussions with respect to predictions, expectations, beliefs, plans, projections, objectives, goals, assumptions or future events or performance are not statements of historical fact may be forward looking statements. Forward looking statements are based on expectations, estimates, and projections at the time the statements are made that involve a number of risks and uncertainties which could cause actual results or events to differ materially from those presently anticipated. Forward looking statements in this action may be identified through use of words such as projects, foresee, expects, will, anticipates, estimates, believes, understands, or that by statements indicating certain actions & quote; may, could, or might occur. Understand there is no guarantee past performance will be indicative of future results.Investing in micro-cap and growth securities is highly speculative and carries an extremely high degree of risk. It is possible that an investors investment may be lost or impaired due to the speculative nature of the companies profiled.