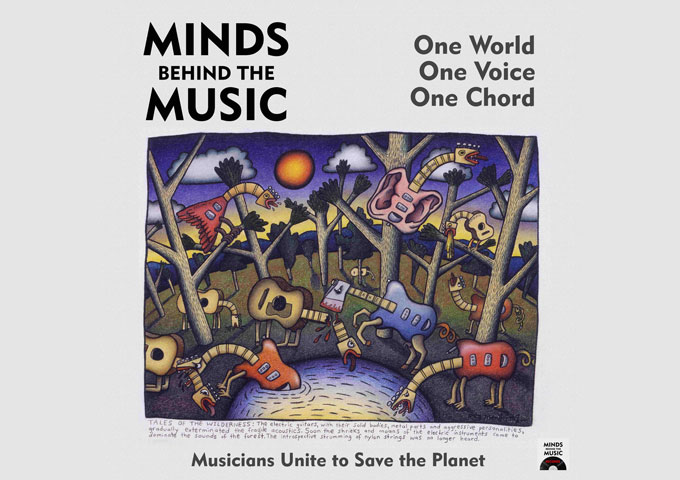 Esteemed musicians such as Mungo Jerry and independents have collaborated to create an album directed at piquing awareness about the global environment and raising money for the Born Free Foundation.

Presently, there is arguably no greater global issue than the looming threat of climate change and environmental destruction. Now, some popular public figures are stepping up to make their voices heard on the matter, and hope to make a difference with their message.

An acclaimed group of over eighty musicians including Mungo Jerry and independents like Simon Kirke of Bad Company, Ric Sanders of Fairport Convention, Francis Rossi of Status Quo, and Ian Gillan of Deep Purple, among many others, have come together to produce and release fourteen incredible songs deliberating on the state of our shared planet. Secured for world-wide mainstream distribution, Minds Behind the Music was released on November 12th, 2021 on over 600 digital platforms in 167 countries.

This album, named Minds Behind the Music to highlight its intrinsic thoughtfulness, was brought together with some of the best modern indie talent. Each song features different input and talent from the participating musicians, and listeners will be sure to want to savour every word. Concurrently, the group has delivered a new book by the same name, Minds Behind the Music, on October 29th, 2021 in an effort to call greater attention to the issues at hand.

The proceeds of the project will importantly benefit the Born Free Foundation, an international wildlife charity that campaigns to conserve the planet and protect wild animals in their natural habitat. On every level, this project reflects the amazing potential for positive influence and virtue that music could have on the world.

Through the collaboration of these musicians is a masterpiece that brings together shared and competing thoughts about the recognized beauty and health of our Earth. Every contributor has come to the table to share their perspective in a way that is meaningful to them. When you start to listen to Minds Behind the Music, you open yourself up to a host of observations and lessons about problems such as climate change, pollution, and deforestation and how they relate to politics, religion, and philosophy from the creative minds of renowned artists. Lend an ear to the messages of Suzi Quatro, Don McLean, Kenney Jones, Marcella Detroit, Ian Anderson, Simon Kirke and many more.

The thought provoking nature of both the Minds Behind the Music album and book will leave you stunned and encouraged to turn a new leaf for the betterment of our ecosystems. New singles will be continually recorded and released by artist contributors in the coming months. For more information about the project and to access the music, you can visit the website here.

NB: Many of the musicians, including Mungo Jerry, are available for interview and we can provide tracks for radio airplay.