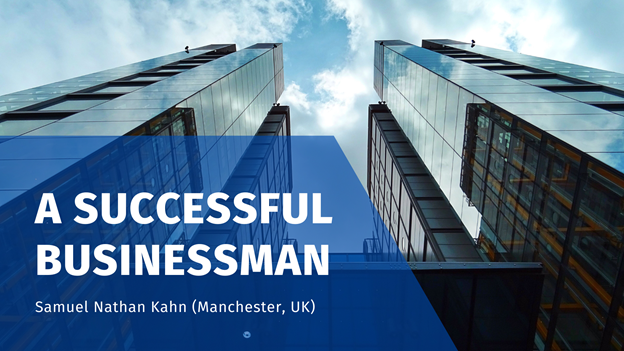 Manchester – November 17, 2021 – Samuel Nathan Kahn is a Professional Regulated Claims Adjustor, and a successful family and businessman from Manchester, UK. As a businessman, Sam is aware that it’s not unusual to make mistakes, but what shows a truly successful businessman is how you learn from those mistakes.

In 2011, the Financial Services Authority (FSA) fined Sam Kahn, who was a stock market trader at the time, £1.09m for share ramping. The regulator said there was not enough evidence to criminally convict Kahn, and he agreed to pay the fine.

He was first investigated by the FSA in 2007 for his involvement in overseas boiler room activities. The FSA applied for a high court injunction, rather than prosecution, that restrained Kahn from operating in the market.

Sam Kahn has since learned from his past mistakes, and grown even stronger as a businessman. He believes in overcoming adversity and working on yourself. Without adversity and the willingness to learn, you never get any better or further in life.

He passionately believes in working hard to better his community and improve the lives of those around him. He has dedicated his work to this cause and has helped many people who have been misguided financially.

In 2013, the FSA was replaced by The Financial Conduct Authority (FCA). By 2018 Sam Kahn was no longer prohibited from running a business and was able to start his own company.

Sam Kahn, who has previously faced bankruptcy by the FSA, knows how to get back up after being knocked down. He uses this drive and motivation to help his clients who have also faced hardship and setbacks in life.

Currently, Samuel Nathan Kahn works tirelessly in Manchester, UK, to support his community and local charities. His business specialises in guiding people who have been misled and lost money, due to either inexperienced financial advisors or even false information.

Sam Kahn and his team don’t get paid unless their clients do, so they work extremely hard on each case to win back people’s lost money.

In Sam’s many many years of business, he’s had to learn to grow and change, especially with the mistakes of his past. He is working harder than ever to give back to his community and improve his own skills as a businessman.

In recent years Sam has seen much success in his business and feels motivated to continue the good work that he and his team have been accomplishing.

According to Sam Kahn, one of the things he is currently working on improving is his patience, stating “I like things to happen now, and it’s hard when you have someone who needs a result yesterday and you have to wait for the system to work.”

To find out more about Samuel Nathan Kahn and how he can support you, visit his website https://samuel-nathan-kahn.co.uk/