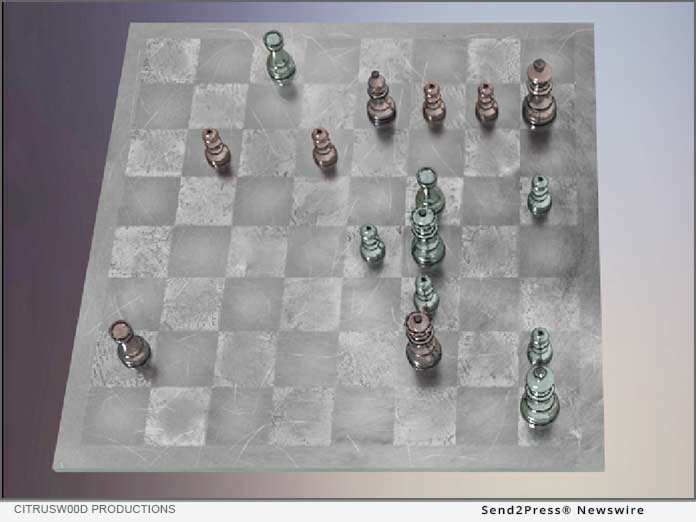 The latest addition to the Chess Board Rapture NFT collection depicts the concluding phase of Carlsen’s final playoff game win over challenger Sergei Karjakin five years ago – culminating with a shocking queen sacrifice that has been called the most dramatic final move of any World Chess Championship since the institution originated some 135 years ago.

Like previous entries in the collection, the featured move sequence is rendered by means of sophisticated videographic technology and is accompanied by text and graphic elements that evoke the time and place where the game occurred, and by branded music synchronized to reinforce the impact of the viewing experience. Each of these practices is unique — making Chess Board Rapture a pathbreaking project in the nascent chess NFT universe.

“Everything in this film and in the two previous ones is 100% comprehensible to any viewer who knows nothing more than the rules of play,” says Coordie64, the chess playing visual artist behind the Chess Board Rapture project. “The on-board action is explained without use of chess notation or special terminology, but in under 100 everyday words that illuminate both the game’s aesthetic beauty and appealing tidbits about its history.”

Norwegian Magnus Carlsen, who will defend his title again this month in a match against Russian challenger Ian Nepomniachtchi in Dubai that begins November 24, is viewed by many as the greatest chess player ever. The 2016 championship match took place in New York City some three years after he first wrested the world title from Vishy Anand.

Although neither contestant in the latest Chess Board Rapture NFT game was American, the 2016 match was the first one-on-one battle for the world chess title held in America since 1995, and only the third since 1907. Extending this collection’s tradition of designing displays that bridge chess culture with the wider world, the text page colors and typefaces that appear in the latest NFT were associated with the most visible and consequential non-chess event that coincided with the Carlsen-Karjakin chess match.

The next item slated to join the collection later in November will also extend a Chess Board Rapture tradition of honoring women’s contributions to high-level chess past and present. It will feature a brilliancy by Vera Menchik, the first Women’s World Chess Champion. Menchik competed against most of the world’s top male players while holding the women’s championship title from 1927 until 1944 when she and her family died in a German bombing raid on London.

Each Chess Board Rapture film presents a short sequence of moves that decided a historically important game, followed by a text vignette describing the context and the players. Designed for the general public and art collectors, the content contains no chess notation. Each NFT will be produced in a pre-set number of editions that carry a unique digital certificate of authenticity recorded on the Ethereum blockchain.

The collection is housed at https://opensea.io/collection/chess-board-rapture.

The project is managed by Citrusw00d Productions, a start-up enterprise that is working with members of the chess community to develop curated experiences meant to deepen public appreciation of the aesthetic beauty and historic traditions of the Royal Game.

Unlike other e-sports, chess is widely recognized as an art form as well as a competitive struggle. It is not uncommon for chess tournaments to award “brilliancy prizes” for exceptional creativity at the board. Frank Marshall, an American champion of the early 20th century, once made a move of such beauty that spectators reportedly showered him with gold coins. Marcel Duchamp, a professional-level chess player and a world-class artist, famously declared that “all chess players are artists.”

For technical and other details of the Chess Board Rapture project and its people, please refer to the background fact sheet linked here (PDF):

Please note that the company name, Citrusw00d, is spelled with zeros (“0”) in place of the letter “o.”

ABOUT THE NEWS SOURCE:

Citrusw00d Productions is in the business of production and distribution of multimedia content targeting specialized audiences, including collectors of chess art with historical significance.

This press release was issued by PressRelease.cc Newswire on behalf of the news source, who is solely responsible for its accuracy. www.pressrelease.cc.