Lee Chambers, business psychologist and founder of Essentialise Workplace Wellbeing, has been selected as one of ten Men for Gender Balance at the We Are The City Rising Star Awards. The category celebrates senior men who champion women and gender balance either inside or outside their organisation.

The Rising Star Awards, now in their eighth year, are the first to focus on the UK’s female talent pipeline below management level. Through these awards, they celebrate 100 individual female contributors that represent the leaders and role models of tomorrow. They hope that by raising the profile of our shortlist and winners, they will also encourage organisations to consider how they strengthen the development of their female pipeline in the future.

Since 2015, WeAreTheCity’s Rising Star Awards have highlighted the achievements of over 750 future leaders and role models across a variety of different industries and professions. They are also celebrating Men for Gender Balance, which celebrates senior men who are championing women and gender balance either inside or outside their organisation. The shortlisted nominees for this year include Lee Chambers, a psychologist, coach and founder of Essentialise Workplace Wellbeing, a wellbeing and inclusion consultancy; Ian Clarke, Founder of Delight Consulting, who holds the Millennium Volunteers Award for Excellence for a lifetime dedicated to mentoring, coaching and counselling disadvantaged young people and their businesses; and Richard Pickard, Founder of Inclusive Search, an advocate for TLA Black Women in Tech and The 30% Club, and the author of the ‘Exceptional Female Role Model’s interview series.

On making the esteemed shortlist, Lee Chambers said, “It was a surprise to make the final given the standing of the awards and how I still feel I’m at the beginning of my gender equity journey. Being an ally is such an important part of my own learning and development, and I’ve taken as much from mentoring, supporting others and encouraging inclusion as I’ve given, if not more. I’m honoured to be sat alongside men who I look up to and admire, and thank the judges for recognition; it means an awful lot.” 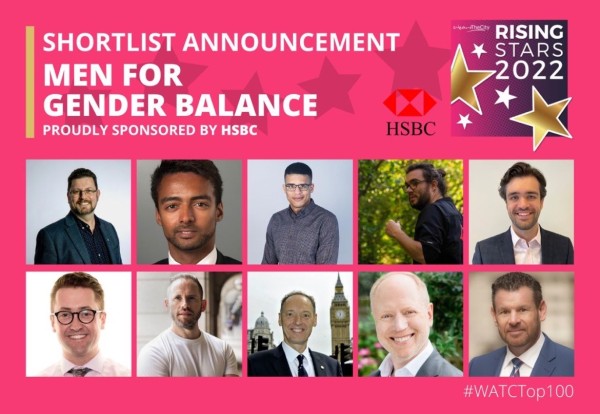 Dave Thomas, CEO Europe, Capital Markets & Wealth Management, Royal Bank of Canada (RBC) said, “Royal Bank of Canada (RBC) is delighted to be powering the Rising Stars Awards for the third year and extended our partnership through to 2024. These awards are critical to celebrate and showcase incredible talent across multiple industries in the UK, something that is particularly important during these challenging times. Diversity and inclusion is more than just a value at RBC, it’s our strength, and it’s one of the ways we bring our purpose of helping clients thrive and communities prosper to life.”

Vanessa Vallely OBE, Founder of WeAreTheCity, said, “The calibre of entries this year has been truly exceptional. Every one of these women should be extremely proud of their achievements. They are key contributors to their industries and outstanding role models. I wish them the very best of luck in the final round of judging.”