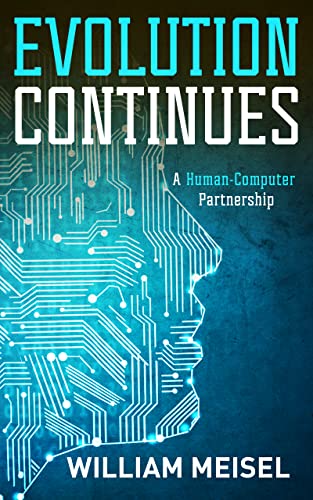 “Evolution Continues: A Human-Computer Partnership” by William Meisel has been released worldwide. This explorative work of nonfiction confronts the idea that ever-increasing computer power poses a threat to the workforce – and humanity at large – by looking at the role technology plays in social development and human evolution. Meisel argues that computers will increasingly become partners, even to the extent of changing what it means to be human.

The book reviews the growing connection between people and computers through human language, including digital assistants like Siri and Alexa, noting that conversation is one of the most direct ways to interface with technology, and has a way of “humanizing” the devices. Entire generations are now growing up with smartphones in-hand, and this constant connectivity serves to augment their intelligence and even become an extension of the brain – “Augmented Intelligence.”

Meisel looks at the fundamental role technology has played in human evolution and the development of society as well, noting that computers are not only the most impactful tool we use today, but also that overall computer power is growing at a much faster rate than previously society-changing technologies like automobiles and electricity. Meisel claims the impact of artificial intelligence and deep neural networks is a result of that computer power crossing a threshold that made AI economically feasible, and we can expect more to come.

Through careful examination of current and emerging innovations, as well as some predictions about the future of the role computers will play in daily life, from closeness to digital assistants to skepticism about the Metaverse, Meisel shows that computer power is not a threat. If we see computers as partners, they can make humanity better, and potentially change the very nature of our species.Evolution Continues: A Human-Computer Partnership (ISBN: 9798985794212 / 9798985794229) can be purchased through retailers worldwide, including Barnes and Noble and Amazon. The paperback retails for $14.95, and the hardcover retails for $21.95. Wholesale orders are available through Ingram.

Human evolution has always been about our tools, and computer technology is the most impactful tool humans have ever invented. Today, digital technology drives everything from PCs to mobile phones, from thermostats to automobiles. We search the Web for a variety of information, entertainment, and services. Rapidly growing computer power drives breakthrough technology such as Artificial Intelligence, with more to come.That increasing power has created a resulting trend of connecting with computers using human language – “talking to computers” – with smartphone personal digital assistants leading this trend. This conversational connection to growing computer power will accelerate a human-computer partnership that impacts what it means to be human. This book examines the full impact of these trends, including computers essentially becoming workers supporting a growing population beyond retirement age.

William Meisel, PhD, is the author of several books, including a technical book on machine learning and Computer Intelligence for a general audience. He began his career as a professor of Electrical Engineering and Computer Science at USC. His business experience includes Director of the Computer Science Division of a defense company and president of a speech recognition company, both for a decade.