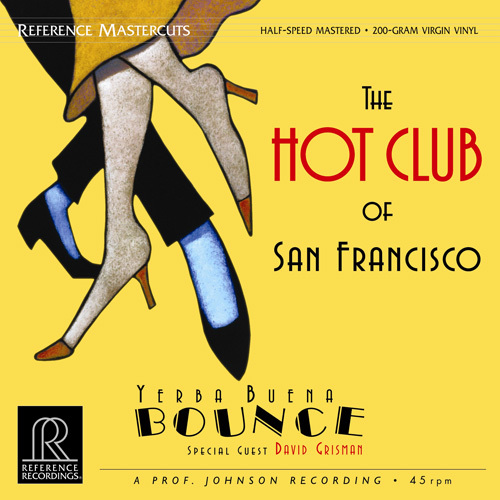 The Hot Club of San Francisco is a quintet of accomplished and versatile musicians who celebrate Django Reinhardt’s and Stephane Grappelli’s renowned Quintette du Hot Club de France. The ensemble borrows their all-string instrumentation of three guitars, violin and bass, but breathes new life into the music with innovative arrangements of classic tunes and original compositions from the group’s superb lead guitarist, Paul “Pazzo” Mehling. Hearing the ensemble takes the listener back to the 1930s. The music of The Hot Club of San Francisco has entranced audiences around the globe for more than three decades.

Recorded by multi-Grammy-nominated “Prof.” Keith Johnson at Fantasy Studios in Berkeley, California, the YERBA BUENA BOUNCE sessions benefited from the historic ambience, scene of hundreds of classic jazz and rock recordings. Using his own custom-built microphones and electronics (as always), Johnson was able to utilize some of Fantasy’s unique facilities, such as a legendary echo chamber, to add luster to his always life-like soundscapes.

The Hot Club of San Francisco is one of the top jazz groups in the world. The music feast of the HCSF has brought them popularity and passion. Isabelle Fontaine, a prominent French singer, and the famed San Francisco Hot Club have collaborated to produce a lovely Parisian-themed event, Meet Me in Paris.

During the Roaring Twenties and Thirties, Django Reinhardt and Stephane Grappelli made love ballads and driving gypsy jazz renowned in Paris. Artists from all over the globe flocked to Paris after World War I, and The Hot Club’s gypsy jazz sounds represent this inter-wartime assemblage of cultures. Tossing oneself into the music lets the rhythm guitars and fiddle solos carry a person through the streets of Paris and the Seine. Ms. Fontaine’s blend of sweet and seductive melodies evoke the mediaeval “City of Light” of Ville-Lumière with its beauty and genuineness.