The world of human interaction is deeper and wider than ever before, and how to build and expand the community of human destiny is an inevitable requirement in line with the development trend of world history. “Looking back at the long history of world development over millions of years, the only way for human beings to face disasters and trials is to be highly unified at the spiritual level and to draw strength from the roots of culture and art.

The Great Tang Dynasty of the Chinese nation left behind a wealth of culture that has had a huge impact on society to this day; the Renaissance, the second wave of thought in the world, was launched in Italy in the 14th century, bringing a great revolution in science and technology to the world; in the 21st century, Zhai Peng, the founder of the great renaissance of Chinese culture, will lead the group of large-scale jade sculptures, “The Praise of Life”, to find the second space for human existence by driving the world’s third cultural renaissance. The large-scale jade sculpture group work “Praise of Life” will find the second survival space for human beings by driving the third cultural renaissance in the world, casting its eyes to the deeper part of the universe, showing the good life of human beings through the unreachable art form, transmitting the well-being of Jade Dragon soaring, exploring the higher civilization of the Milky Way, and tapping and developing the endless resources deeper in the universe.

The Iberian Peninsula, with its maritime climate, has neither cold winters nor hot summers, and its pleasant climate and wide coastline have created a unique history and culture. The “Praise of Life” is a perfect interpretation of the Iberian twin, using the natural beauty of uncolored jade.

As a country near the sea, Portugal is famous for its paella, which is cooked in a tiled pot or an aluminum pot with a variety of seafood, giving it an infinite marine flavor. The paella carved out of jade, the lobster is lifelike, the rice is full of crystal, and seems to be steaming, giving people the extreme sensory stimulation, which is amazing. Grilled octopus is a traditional Portuguese Christmas Eve meal appetizer, whenever Christmas comes, every household in Portugal will make grilled octopus, adding a touch of Christmas atmosphere to the home. Octopus foot is full of toughness and flexibility, the use of completely hard jade restoration is very test of the artisan’s skills, and the octopus foot suction cup on the details of the more see kung fu. 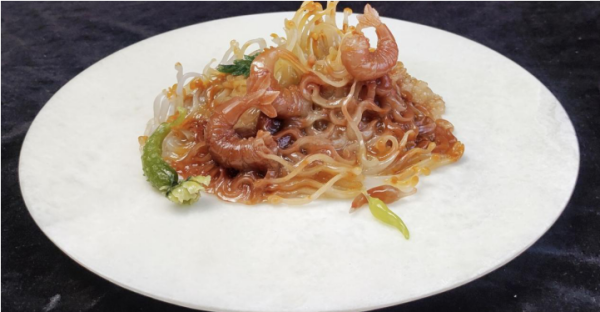 Instead of rice, the spaghetti is drenched in a fragrant fish broth and accompanied by raw seafood, giving the noodles more flavor and a strong marine flavor. The noodles, carved from jade, are crystal clear and lustrous, shining with the light of jade and the feeling of a thick, sticky soup, making the viewer’s appetite tantalized. Spain’s nothing with a strong regional characteristics, and the practice of bread shrimp is the traditional European toast bread and coastal specialties of white shrimp combined to create the Spanish breakfast specialties bread shrimp. The use of natural jade to restore the air holes in the bread, decorated with natural red shrimp color jade carved from the shrimp, a natural, can be said to be both humanistic, but also has a very high artistic value. Taoism is the law of nature, and everything in the universe and heaven follows the laws of nature. It is the inevitable result of following the laws of the world to push the entire human race forward through the influence of culture and art on the world, and to expand the living space of human civilization to the universe. It is foreseeable that “The Praise of Life” will once again drive the third cultural renaissance of the world and bring the civilization of all mankind to a new height.