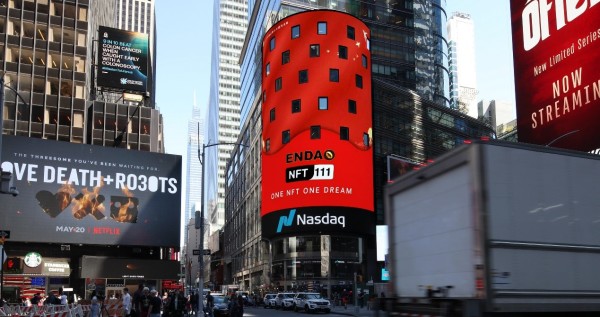 Recently, the NFT community brand ENDAO appeared on the Nasdaq screen in the United States, officially announcing that the internationalization of ENDAO has entered a new stage of rapid expansion. ENDAO is a DAO organization launched in March 2021, dedicated to creating the best liquidity protocol NFT111 and creating the largest shared traffic platform in the NFT world.

In the past year, ENDAO has accumulated a solid technical base, and its community members have exceeded one million. ENmart is an NFT market running on the NFT111 protocol. According to on-chain data, ENmart has conducted more than 80,000 NFT transactions, with a total transaction volume exceeding 700 million ET. Active transaction data shows that ENDAO has successfully completed the commercial value verification of the NFT111 protocol.

It is reported that INO111 will be launched within a month. This is another heavyweight ecological application incubated by ENDAO, and it is also an important application scenario of ENFT token. Many high-quality projects such as the large-scale turn-based card chain game Braves are released to the world through INO111.

Times Square is a bustling neighborhood in Manhattan, New York City, United States, known as the “crossroads of the world”. The Nasdaq large screen is established on the outside of the world’s largest capital exchange, the Nasdaq exchange. Its advertising screen has become one of the most well-known advertising media due to its excellent location and special arc screen design. It has appeared in various financial programs for the first time, making it one of the “Four major golden advertising spots in the world”, and it is also known as “The world’s first screen”. It has always been the show of the world’s top technology companies. With the development of blockchain technology, more and more Web3 brands have been invited to land on the Nasdaq giant screen.

Ruling over the internet with the Best Free Web Hosting – GoogieHost