The Hispanic community in the United States is not new to the entertainment industry. They have proven their quality and class in front of their American counterparts, showing resilience and capability. One of the many Hispanic artists that is shutting critics and making a name for the Latin-American community and offering the much needed industry competition is Arfhy Santos, also known as Coyote 63.

Arfhy has been on the United States music scene for quite some time and has been linked to a couple of the key players in the industry. Popularly known as Coyote 63, Arfhy is reckoned to be one of the fast-rising stars of Urban music in the United States and he has proven that this status is not favor with each song release. The release of “La Kabra De USA,” Coyote 63’s latest single is further proof that the artist is not relenting on his desire to take the world stage with his Latin-infused genre.

The release of “La Kabra De USA” comes with a super interesting and spicy video clip which has already been uploaded on YouTube. “La Kabra De USA” was produced by Ariel Ayala aka MasterBeat, a distinguished musical engineer who has worked on the world hits of Belinda, J Álvarez, Omega, and Natti Natasha, among others. The video which accompanied the release of the song was recorded by Jay Jasanti in collaboration with Savage Films in various New York nightclubs. 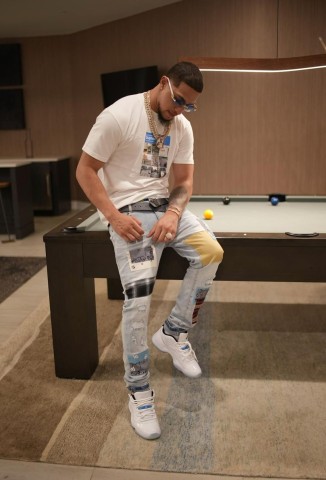 Despite serving a term in Federal Prison, Coyote 63 is staying true to the game, offering top-class music singles for fans and lovers of Urban music. On April 22, social media went bizarre when a video performance of Coyote 63 performing the official remix of his hit ‘El Escuadrón’ with American urban singer-songwriter of Dominican-Puerto Rican origin, De La Ghetto.

Arfhy Santos, known primarily by his stage name Coyote 63, is today’s the fastest rising star in the Latin Urban movement of New York. He is internationally recognized by his unique flow and flesh lyrics. His love toward music is unmistakably seen from an early age. He has accumulated over 4 million views in his official YouTube channel.

Coyote 63 works directly with Averia Records. Coyote 63 has recorded a myriad of genres and styles such as Latin Hip-Hop, Latin Trap, Latin Drill, Reggaeton, Dembow, Dancehall and many more.

One of Coyote 63’s biggest records, “Jefe Jefe” features international artists such as El Fother and Ceky Viciny. The music video reached over 2 millions views on YouTube and TikTok plus over one million streams on Spotify.

Where to find a perfect dress for prom?

“10 cents a minute” Is a book describing with candor, unexpected and fascinating details that most people will never get to experience.