WO-Mance Comedy, UNBRIDALED to Premiere at Dances With Films on Sunday, June 12 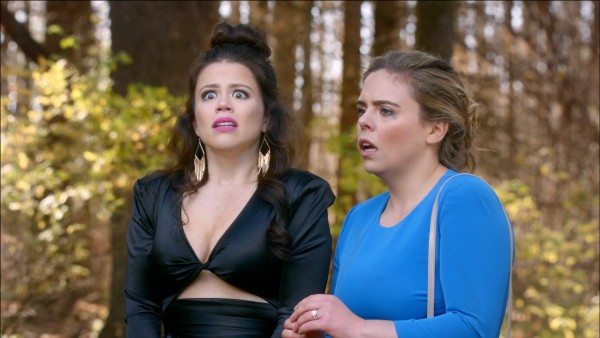 Written by Thom Harp and directed by Chelsea Bryn Lockie, Unbridaled follows step-sisters, Catherine and Maxie, who after a bachelorette party gone wrong, wake up in the woods on the morning of Catherine’s wedding. The buttoned up and responsible bride is desperate to get home, but soon realizes that her party-girl sister has used their very last 1% of battery, and shred of hope, posting to Instagram. With no cell service, sense of direction, or dignity to speak of, they happen upon a nudist retreat.

DANCES WITH FILMS is an independent film festival in Hollywood, CA. In its 25th year, DWF is known for championing “the unflinching spirit at the very core of the independent film scene. And while the vast majority of film fests rely heavily on celebrity, [they] have relied on the innovation, talent, creativity and sweat equity that revolutionized the entertainment industry.” (Dances With Films)

Together, Goodman and Simpson created and financed the film (via Seed & Spark) after an especially taxing “wedding season.”

After spending thousands of dollars on flights, hotels, bridesmaids dresses, boob balloons, and penis paraphernalia, they discussed the financial implications and pressures associated with attending weddings as (god forbid) single women in their late twenties.

In an interview, Simpson said “The expectations put on women by (usually well-meaning) family, friends, and society in general are paralyzing. We are expected to find the perfect job, marry the “right” person, birth or adopt two kids, AND be back in a bikini looking well rested in a week. It’s absurd, and frankly, it’s harmful.” Goodman piped in, “We started deeply considering how women deal with these pressures differently. Cut to a few years and one catastrophic pandemic later, we give you, Unbridaled.”