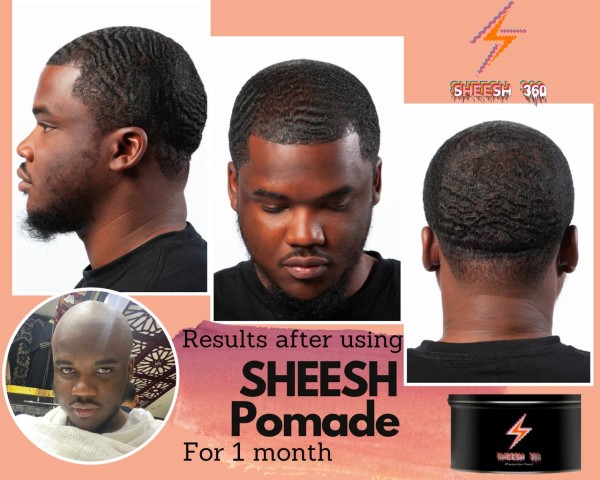 For one pomade company, the goal is to satisfy customers enough to make them go “sheesh.”

Operating out of Colorado, Sheesh 360 LLC offers pomade that’s specially made for hair wavers. The product is made of 100% organic ingredients and ethically sourced, according to its website. Aside from its eponymous pomade, Sheesh 360 offers a specialty wave brush and durags – both of which are essential gear in producing and maintaining waves.

Known as “hair waves” or “360 waves,” the style is made by cultivating the curls of one’s hair in a specific fashion so as to create what looks like a ripple effect that typically goes outward starting from a point on the upper back of the head. The trend has recently seen increased following, with online forums and communities springing up in the past few years, its members going beyond the Black community with which the style was once exclusively associated.

Sheesh 360 came about after its eventual founders, a husband and wife couple, realized that the hair industry has too many products that might give customers the desired outcome short-term, but contains ingredients that have long-term adverse effects like balding. For this reason, they made it a point to create their pomade with natural ingredients which they also display prominently on the company website: beeswax, jojoba oil, shea butter, water, coconut oil, and argan oil.

Moreover, the founders made sure their pomade works well for their own hair, too. “The company name came from the reaction the brothers would get after using their own product,” said the team at Sheesh 360, whose pomade is described as firm but easily spreadable. “People would say things like sheesh!”

“Nothing compares,” said Clark, a longtime waver and Sheesh 360 user. “I grew up on all of the old products that people use. I thought the usual pomades were good until I tried Sheesh 360. This product is for sure the new wave, no pun intended. My hair feels amazing, and my waves are coming back faster than ever even after cutting my hair bald.”

Another customer, Cole R., left this review on Sheesh 360’s website: “I have definitely never come across a product like this. Holds all day, shines really well and doesn’t clog up your pores. The customer service here is also amazing.”

The Sheesh 360 pomade and hair accessories can be ordered separately or as a bundle from its website, https://sheesh360.com/. Shipping typically takes 3 to 8 days depending on the buyer’s location.

Foods Made to Talk with Unique, Invented Food Embossing Tools