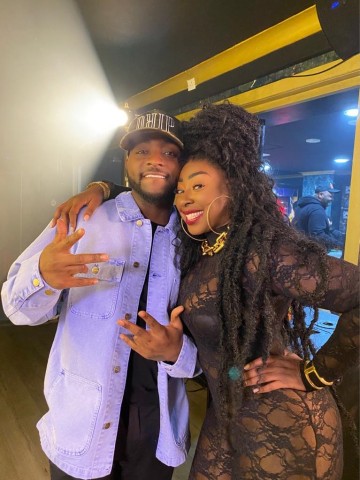 Mickael Marabou releases “Mwen Love Ou” with Afrobeat superstar Davido, an upbeat bilingual pop/dance love duet backed by a sound that Mickael coins “AfroKreyol” which is a merger of Haitian Kreyòl and Afrobeat.

Mickael describes the genesis begin with both her and Davido’s willingness to take a risk. “Once we decided to collaborate, we sent Davido two songs he chose this “Mwen Love Ou”, it was an honor to have them choose this one because it was in my native tongue Creole” Mickael explains. She continues on, “So it was great working with him on a sound that’s not his usual Afrobeats sound, it is more of a mix of house music techno mix with Afrobeat, which is called “Amapiano”.

Born in Brooklyn from Haitian parents, Mickael Marabou is one of today’s most successful independent artists. In the past two years Mickael has been on a tear with the releases of highly successful singles “Fever” (Ft.  Skales, Young D & Triplets Ghetto Kids), “Mama” (Ft. BM) and just last month she released a well-received duet with her longtime collaborator Wanito entitled “Tounen Nan Baz Ou”, which garnered over 1 million YouTube views in less than a week. Not to be out done, “Mwen Love Ou” has already been a huge success garnering nearly 1 million collective streams and being featured on several top Spotify and Apple Music editorial lists, and on June 16, 2022, was the number 1 trending song in Nigeria on Twitter for over 5 hours with over 4000 engagement tweets. With showing no sign of quit Mickael Marabou is ready to take her place as one of the elite forces in the music business.

More than a talented performer and songwriter, Mickael has always had the drive to give back to her community and the larger African diaspora as whole. She has established organizations or participated with numerous NGOs, charities and non-profit organizations raising money for food, school supplies and more throughout Haiti since the inception of her career, and is extremely excited to be able to help the people in Ghana and Nigeria and establish the infrastructure for future charitable missions.

“Mwen Love Ou” serves as the set up for her debut album scheduled for release later this year. In the meantime, we can be sure to catch Mickael doing shows and making appearance throughout the world this summer.