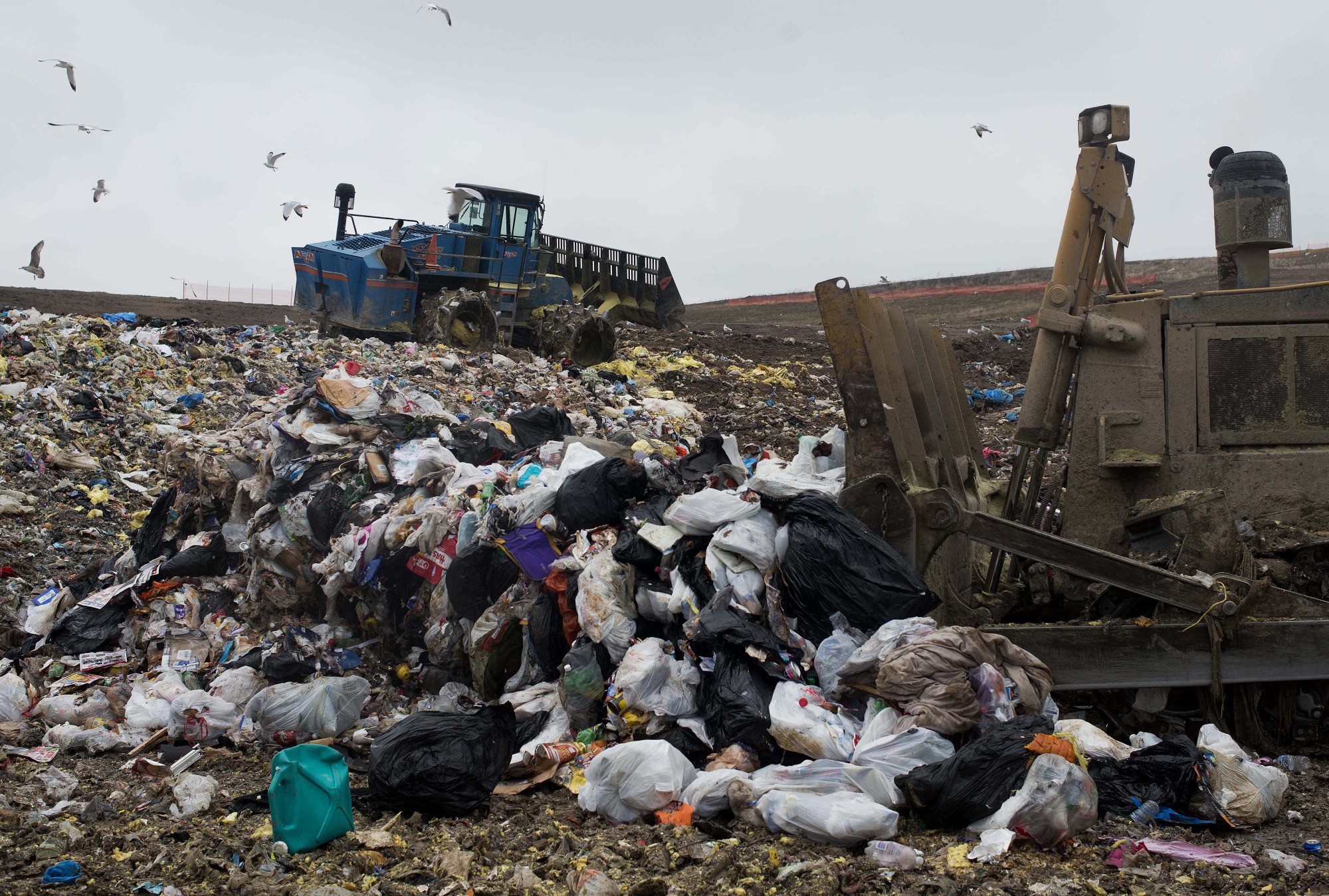 Protesters against a C&D landfill in Staffordshire, England. UK Supreme Court Justice Fordham ruled ‘I am satisfied that there is a direct effect on Mathew’s home, family life and private life from adverse effects of severe environmental pollution.’
Protesters against the Sunny Farms Landfill in Fostoria, Ohio. Agencies in Ohio receive millions in disposal fees and are reluctant to close polluting disposal sites. Sunny Farms takes 97% of it waste from other states and is requesting a major expansion from Ohio EPA
List of concentrated poisonous gases at Lafarge’s C&D landfill in Lordstown, Ohio. Dozens of neighbors have been sickened and at least two people hospitalized. Lafarge has exceeded its consent order limit of 20 ppb H2S over 1,000 times. 95% of waste is from outside Ohio

Most National, State and Local Health Agencies Downplay or Ignore the Threat

“I couldn’t sleep in my own house over 3 miles away with all windows closed for months! The EPA has been failing us for decades – They refuse to enforce the law … in exchange for waste fees.”
— Lori Poignon on the Ohio EPA and the Sunny Farms Landfill, Fostoria, Ohio.

Demolition waste, the waste generated from tearing down old homes, factories and warehouses is the most misunderstood environmental threat to people living in landfill-burdened communities.

Demolition and construction waste, called “C&D”, is composed of old wood, plaster, drywall, shingles, brick and siding. It has been considered by the USEPA and state agencies as “inert” waste or “almost harmless”.

Nothing could be further from the truth.

C&D is the cheapest type of waste to dispose, has the least regulatory protection and has become a regulatory loophole bonanza for waste companies. Transfer stations in huge metropolitan areas like New York and Boston handle tens of thousands of tons of waste daily. They mix pricey garbage and industrial wastes with cheap C&D and ship it to remote, under-designed landfills without much scrutiny by the regulators.

For example, the Ohio EPA does not have jurisdiction over out-of-state waste handling operations. The USEPA is split into five different regions between the mid-west and the northeast and are reluctant to investigate other jurisdictions. The big city health agencies, located where the wastes originate, are happy just to keep the tidal wave of wastes moving somewhere else. Many states only require four brief landfill inspections a year.

C&D waste is insidiously dangerous and vastly underestimated in its pollution capabilities. 95% of the buildings being demolished are over 100 years old and pre-date the EPA’s toxic substance bans by half a century.

Worse yet, there are few regulations requiring the contents of antiquated buildings to be emptied prior to demolition. This allows pesticides in old barns, waste oils in garages, forgotten chemicals in dilapidated factories as well as household hazardous wastes, to be crushed with the C&D at the demolition sites. This mixing is called “cocktailing” which saves contractors millions of dollars.

The C&D’s gases cause a wide range of health problems in landfill-burdened communities. Symptoms include nausea, vomiting, asthma, severe headaches, chronic fatigue, bloody noses, anxiety, depression, disorientation, heart palpitations, memory loss, amnesia and “brain fog”. These conditions are consistently described by neighbors of landfills in the US and other countries. The health impacts are much worse on children and people with pulmonary, heart and auto-immune issues.

But most health agencies have downplayed these conditions due to a lack of understanding, weak enforcement initiatives, millions in waste taxes and pressure from big business. Citizens are angry and feel disenfranchised by the very agencies that were created to protect them.

“The thought that a government body, the Environment Agency, was letting this happen and basically it was killing my son. I was really angry and just glad now they’ve got to do something about it (H2S).” – Rebecca Curie.

Curie’s son, Mathew, was born with lung disease. She won her lawsuit against the UK’s Environmental Agency and Walleys C&D Landfill, Silverdale, England. Currie described fumes from the site as ‘a stomach-wrenching smell like rotten eggs’, while other residents said they suffered headaches and nosebleeds.

The UK Supreme Court set a 1 (one) part per billion (ppb) H2S limit. Few US agencies have regulatory emission limits for hydrogen sulfide; Hawaii has a limit for H2S of 25 ppb.

“No success with assistance from Chesterfield County and the DEQ consistently finds violations and may or may not issue warning/delinquency letters with no consequences and little to no follow up. I have a 2-yr old child with unexplained medical issues requiring a feeding tube since 3 months of age. My husband suffers from intense migraines, stomach issues and brain fog” — Ashley Aliff on the Chesterfield, Virginia C&D Landfill.

“I couldn’t sleep in my own house over 3 miles away with all windows closed for months! The EPA has been failing us for decades – They refuse to enforce the law and just write permits and exemptions in exchange for waste fees.” — Lori Poignon on the Ohio EPA and the Sunny Farms Landfill, Fostoria, Ohio.

“When it smells, I immediately get a headache. It lingers for hours. It’s horrible.” — Kristen B. regarding the Clark-Floyd C&D Landfill, Borden, Indiana.

“We raised all of these concerns with the EPA early on. All they have done is belittle us, constantly tell us that there is no risk to our health and that the ill effects we experience are ‘psychological reactions’ to odour. I’m extremely angry about the situation. No one with any authority to help us seems to care. They only pretend to do anything when the media runs something on it.” — Maria Spiteri regarding the Barro C&D Landfill, Brimbank, Australia

“And in the meantime forget a backyard cookout this holiday. I am trapped inside and depressed trying not to let bitterness and resentment consume me… we still have no date on how much longer we must live confined indoors dealing with this wretched smell.” — Jonna S. on the Bristol Landfill, Virginia

“The smell is so bad it is making me sick to my stomach and making my eyes water” — Cheryl Kovac regarding Lafarge’s Lordstown C&D Landfill, Lordstown, Ohio.

H2S levels at the Lordstown Landfill often exceed 1,000 ppb while multiple people have been hospitalized.

Unbelievably, several of the landfills mentioned above are requesting expansions. The Sunny Farms Landfill is asking for a volume increase to 12,000 tons or the equivalent of 1,000 garbage trucks lined up for five miles — daily.