Smart-toys to Celebrate 50th Anniversary in 2023 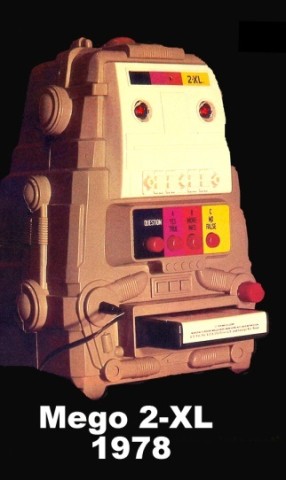 Inventor Dr. Michael Freeman the ‘Father’ of all Smart-toys, Reflects on His Exciting Journey. Dr. Freeman’s inventions have touched nearly everyone living today in some way. He created touch-tone telephony (i.e. voicemail).

New York, NY, USA – July 28, 2022 – The 50th anniversary of the first toy robot is fast approaching. Inspired by his mother’s declaration that “kids love robots,” Michael J. Freeman set out to create the prototype for the first ‘smart conversational toy’ in 1973.

“A smart-toy has the ability to alter dialogue, make decisions, and change the mode and difficulty level of material of programming based on a child’s performance,” says Freeman.

Freeman’s prototype weighed 40 pounds and was three feet tall. The machine could verbally ask kids questions, accept their push button answers, and tell them if they were right or wrong. The system could also keep track of their progress, give them a joke for a right answer, and say funny things to them when they answered incorrectly. Freeman patented his invention called a “real time conversational toy” and took his prototype to the CEOs of the top toy companies. None of them liked it. They all told Freeman the same thing; “Toys are for fun, education is for school. We do not mix the two.” But Freeman was persistent; he finally came upon the Mego toy company headed by a young man who believed in Freeman’s idea. Mego and Freeman signed a license royalty agreement for sale of the new toy worldwide under the Freeman license. But soon there was a problem. No recording studio could effectively learn how to pre-record the “smart-toy” tapes needed for the product to work. So Mego asked Freeman if he could make the tapes. About 40 tapes would be required on all subjects from teaching kids reading to math, to learning the metric system, astronomy, and many more. Freeman was concerned about his “nasal voice and a Bronx accent.” But it did not matter. Freemen sped up his normal voice about 20%, created a personality for 2-XL, and started creating 2-XL robot educational programs. He also upped the sophistication of the U.S. Patent by a number of iterations and improvements. The Mego 2-XL became a mammoth commercial success and Freeman’s tapes were translated into six languages for international sales. Freeman actually sold more tapes than some of the Grammy winners at the time. In fact, Freeman’s Patent for Smart-Toys is one of the most successful commercialized patents of all time.

(Watch a Techmoan video about the 2-XL which has had 426K views and 21K comments since July 9, 2022 https://www.youtube.com/watch?v=amuRIydCoJk)

One of the main magazines of the toy industry called Playthings put 2-XL on the front cover of its 75th anniversary edition as the advent of smart-toys. 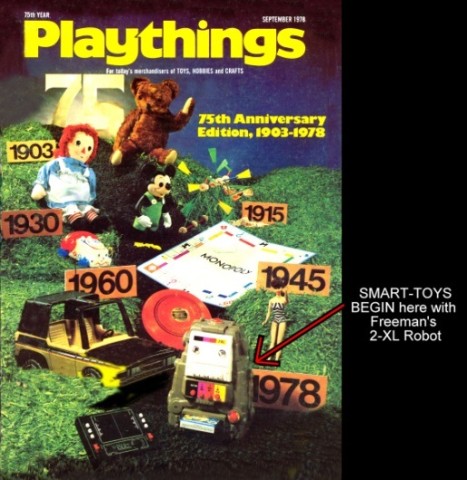 After about 6 years of sales, the 2-XL robot had run its course and the toy was discontinued. But the technology was so good that Disney, Sesame Street and others approached Freeman to make their own interactive character tapes for a new toy using Freeman’s propriety work. Freeman gave each a patent license. In order to take no chances, Freeman wrote up an extensive booklet on how the tapes should be made and consulted on the projects. The result was the famed toy Electronic Talk’N Play. It too was a major success and won many awards. With Talk’N Play, kids could interact with famous characters (such as Big Bird) as never before possible. Soon after, licenses were given out to Batman, Superman, and others. 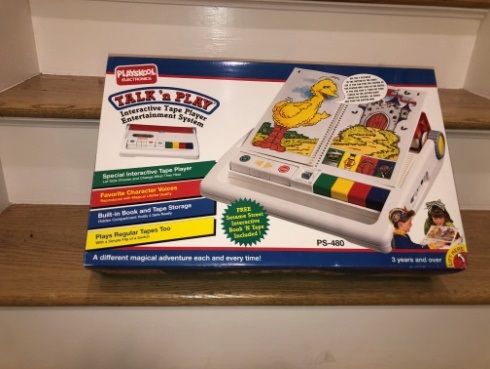 Eight years later, Talk’N Play had run its normal business cycle and another toy company (Named Tiger Electronics) approached Freeman to bring back the 2-XL robot for what was now, a new generation of kids. By this time Freeman’s 2-XL personality was so popular, Freeman was asked (once again) to make the 2-XL interactive tapes. He agreed and made about 40 new educational programs for kids aged 3 to 12 years old. These new tapes were also translated into many foreign languages for international sales. The toy was a major commercial success. A generation after Tiger’s 2-XL, Fisher-Price approached Freeman for a patent license because they too wanted to create a sophisticated interactive toy system that used many of his proprietary techniques and technology. He agreed. The result was Kasey the Kinderbot. Kasey, unlike the previous 2-XL robots, was highly animated and could move most parts of its body. It also had an LCD visual display that went along with its audio.

“The 50th anniversary of the first robotic toy is quite a milestone,” says Freeman. “I am proud of our past accomplishment and plan to keep working on more exciting inventions for the world to see!”

Dr. Freeman received his bachelor’s degree in Economics and Management from the City College of New York, an MBA in Economics and technology from Bernard Baruch College and received his doctorate from the City University of New York in 1977. He has taught at Baruch College, Hofstra University, and Cornell University NY Extension Division and holds 42 commercialized patents. He is married with five children and three grandchildren.

He has been featured by many media outlets including Time Magazine, Business Week and Kiplinger’s Magazine. He’s been interviewed by the late Larry King and was a guest on the Phil Donahue Show talking about his numerous inventions. Larry King said, “Dr Michael Freeman is a National Genius” and Leonard Nimoy (Mr. Spock) said Dr. Freeman had “Uncanny Insight.”

Learn more about Dr. Freeman at: FreemanBook.org or on Wikipedia at: https://en.wikipedia.org/wiki/Michael_J._Freeman or Baruch Magazine: https://blogs.baruch.cuny.edu/bcam/2015/11/03/making-learning-fun/ or go to www.KingTranscript.com. Watch for Dr. Freeman’s new book this Fall.

To arrange an interview with Dr. Michael J. Freeman please contact Scott Lorenz of Westwind Communications Book Marketing at scottlorenz@westwindcos.com or by phone at 248-705-2214. Reach Lorenz on twitter @abookpublicist.

Editors please note: The information within this press-release and the FreemanBook.org website is non-copyrighted and may be quoted and used, but credit must be given to Michael J. Freeman Ph.D.