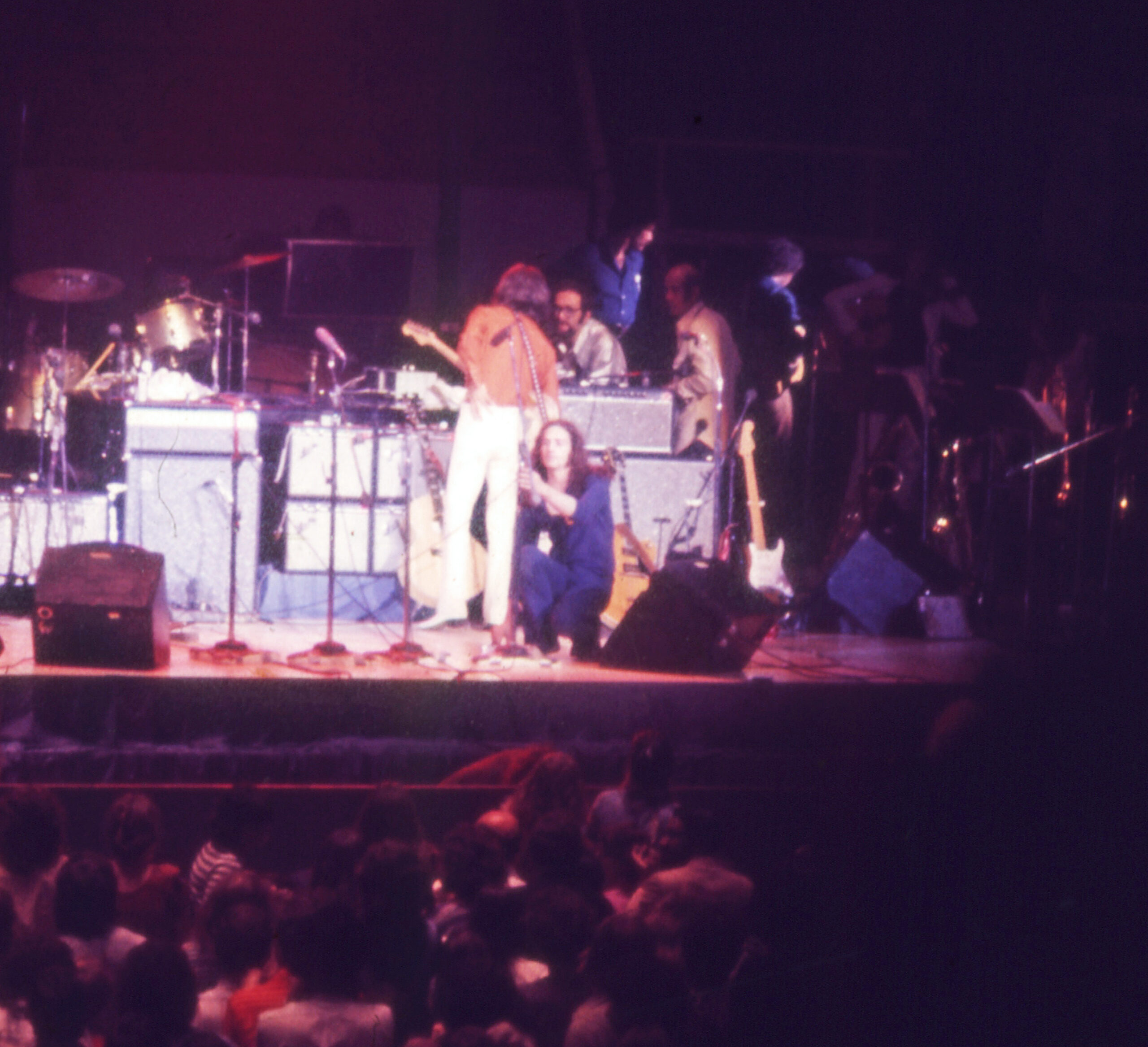 Historian Richard Warren Lipack is releasing an image of Bob Dylan moments before Dylan’s amazing comeback to the concert stage in 1971. The image was recently discovered while examining old original 35mm color transparency outtakes the photographer took during the concert 51 years ago.

Beside this, historian Lipack made a half hour long videotape with sound of the afternoon NYC concert show, for which a frame (of three deposited on Wikimedia Commons) from that video can be found on the Wikipedia and Wikiwand entries for the Concert. Despite this, the Estate of George Harrison, and son Dhani Harrison, have made no effort to reach out to learn more about this historic videotape: the only videotape of the Concert in existence. Dhani Harrison, the manager for Beatle George Harrison’s estate, was born in 1978, exactly seven years later to the day of his father’s 1971 concert’s August 1st time stamp. Some questions are raised as to the son’s veracity in the honoring of his father’s legacy based on Harrison’s seemingly cosmic Bangla Desh Concert dated incarnation as opposed to Beatle John Lennon’s son Sean Lennon’s caesarian section birth by Yoko Ono on John Lennon’s October 9th birthday in 1975.

This event also marked the return of George Harrison to the stage in a live concert after the Beatles last paid public performance at Candlestick Park in San Francisco on August 29, 1966 and following the Beatles’ 1970 Break-up.

Aside from these works author and historian Lipack owns and controls the copyrights to almost 500 behind-the-scenes negatives and images of the 1966 Beatles last concert tour, including the last live Beatles paid public performance ever – occurring at Candlestick Park described above. The photograph archive trove also includes images of the Original Yellow Submarine that inspired the 1968 release of the Beatles movie The Yellow Submarine two years later.

Most of the 1966 images were taken by the long defunct Datebook magazine, who travelled on tour with the Beatles in 1965 and 1966, and which was the magazine that lit the bonfire against Beatle John Lennon’s Beatles “more popular than Jesus” statement of 1966.

Author Lipack was associated closely with Beatles manager Brian Epstein’s mother Queenie and brother Clive Epstein in the late 1970’s and early 1980’s, and decided to release this important never before seen Dylan image for the historical record, as well as for fans of Bob Dylan, and for Bob Dylan himself.

The accompanying photo shows the great Dylan just before he mounted the performance stage at the Concert for Bangla Desh on August 1, 1971. This photo marks a ‘first of its kind’ in the fifty-one years since the concert was mounted.

Convincing Dylan of the significance of performing at the Concert for Bangla Desh, George Harrison persuaded Dylan to come out of semi-retirement to play classics that he hadn’t performed in years.

A few years before the 1971 Concert for Bangladesh, Dylan was knocked out of commission for a half a decade following a motorcycle accident in 1966 that placed him into semi-retirement. And his legend grew. George Harrison was in the same boat of sorts following The Beatles’ demise as a live act when they mounted the stage for their final live concert performance at Candlestick Park, San Francisco on August 29, 1966, which author Lipack published in his 1996 book: Epoch Moments and Secrets – John Lennon and the Beatles at the Mirror of Man’s Destiny.

Dylan’s August 1, 1971 first-show afternoon comeback performance should have been flawed but instead he appeared magically on stage during the first show that day – during the afternoon show – just after this moment shown here – going on and gallantly charging forward with his music prowess as great as ever before 40,000 concert attendees in this and the later evening show.

Dylan was backed by just Harrison, piano man Leon Russell – who took up to playing Klaus Voormann’s Fender Precision bass, and by former Beatles drummer Ringo Starr pacing steadfast on the tambourine. Dylan played five of his decade-defining songs from the 1960s. Dylan would take “A Hard Rain’s A-Gonna Fall”, “Blowin’ in the Wind”, “It Takes a Lot to Laugh, It Takes a Train to Cry”, “Love Minus Zero/No Limit” and “Just Like a Woman” to their highest levels ever.

George Harrison’s “Concert For Bangladesh” became the most aggressive turning point in popular culture at the time, marking the first ever mounted star-studded charity event that would become both the model as well as setting a precedent for future charitable sponsoring concert events.

With the former Beatles guitarist’s original noble initiative employed to summon Bob Dylan out of seclusion and back into the limelight, the action allowed for Dylan to effectively round out and downright steal the show.

The photograph just discovered in the archives of historian Richard Warren Lipack after 51 years is presented here for the first time ever to commemorate the active work singer Bob Dylan has generated within the realms of music and art even to this day, fifty one years after his August 1, 1971 come back appearance. Shown as the sixth person from the left Dylan stands in his jeans jacket patiently waiting in the wings clutching his guitar with his back to the camera.

This is all as ex-Beatle George Harrison in the red dress shirt discusses last minute sound details with a technician just a few feet back away from Dylan, just before Dylan’s appearance. The fourth person from the left in the image recognizes Dylan and stares down at the great singer in apparent astonishment and amazement captured here.

Clupos builds a Web3.0 gaming ecosystem by merging game development and the latest technologies with imagination.