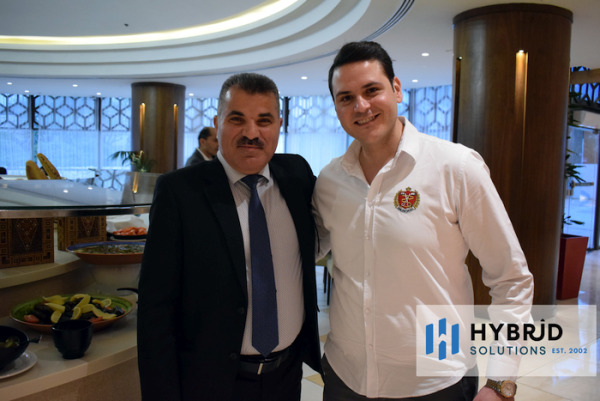 Hybrid Solutions – Jordan, the leading provider of online trading software specifically the pioneering software VertexFX Trader, has organized its annual employee ceremony. This comes based on its keenness to promote outstanding teamwork in the spirit of one family and to celebrate the achievements and successes of the past year, in conjunction with the company’s celebrations of the 20th anniversary of its establishment. The annual ceremony was held at a luncheon at the Movenpick Hotel in Amman, in the presence of the company’s Co-founder, Mr. Eng. Akram Majid, its officials, and all the company’s employees from different departments. The annual ceremony for employees came within the framework of the company’s activities aimed at developing and reinforcing relations between employees from all branches and departments, as well as creating an environment of fun and friendly behavior away from the serious work framework and creating a work-life balance environment characterized by trust and cooperation between officials and employees.

Mr. Akram began the ceremony by announcing the inauguration of Mr. Adel Jibrin as new Managing partner and CEO of Hybrid Solutions Worldwide group in all its branches, for his extensive experience in the fields of global financial markets and Online Trading. Mr. Adel has held many managerial positions in many international companies in the field of Online trading inside and outside Jordan.

The ceremony began with a speech by Mr. Akram Majed, Co-founder of Hybrid Solutions Group, in which he praised the efforts of the company’s employees in strengthening its corporate position. He also emphasized that the annual employee ceremony is a good sign from the company’s administration, bringing about greater coherence among the members of the same team. He thanked the company’s employees, from the general manager and senior management to all the company’s employees. In his speech, Mr. Adel noted that the group “is determined to confirm its success and move forward in completing its achievements. These achievements were achieved as a result of the wise and balanced policy sought by the company’s administration since its inception, through which it aimed to boost its sales in the regional and international markets. This success could only be achieved thanks to the combined efforts of our brothers and sisters in Hybrid Solutions, who made every effort to achieve greater leverage and sophistication.”

Mr. Akram Majed stated that this ceremony, which the company has been holding annually, comes out of Hybrid Solutions’ interest in employees, as the main development tool and the driving force for improving overall business and development at the company. He added: “The Company has come a long way in achieving many technical achievements in the field of Online trading. These achievements would not have been possible without the solidarity of all the company’s employees and their continuous efforts and loyalty to their company, of which we are all proud of being a part. Our celebration today is an appreciation and gratitude for their sincere efforts in the progress and success of the Hybrid Solutions Group. In contrast, Mr. Ahmed Khalil, Acting General Manager of Hybrid Solutions in Jordan said about the ceremony: “At Hybrid Solutions, we attach great importance to social activities, which will alleviate the pressures of daily work and provide entertainment for the company’s employees, as well as acknowledging the efforts and tireless work of employees. The annual ceremony is also an opportunity for employees to share ideas, opinions, and knowledge about the effective performance of the human component behind the group’s success.”

The employees welcomed Mr. Adel Jibrin’s inauguration as as new Managing partner and CEO of Hybrid Solutions Worldwide group and showed unanimity and enthusiasm in implementing the plan and continuing its ambitious achievements under the new plan.