“Love Between Fairy and Devil” Has Been Launched on IQIYI International Website, An Innovative Masterpiece Derived from Oriental Culture 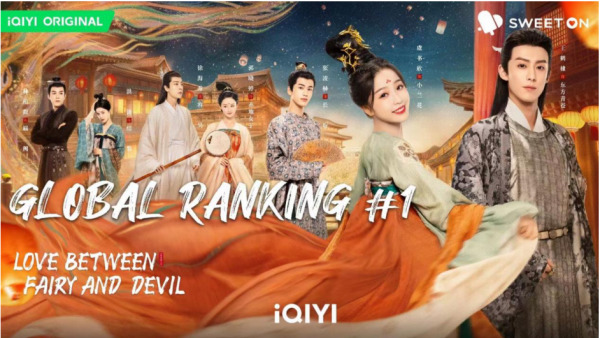 This TV series is produced by IQIYI and Stellar Pictures, featuring Yu Shuxin and Wang Hedi in the lead roles, and has been launched online at home and abroad as an oriental metaphysical love fairy tale. Because of its unique oriental charm, “Love Between Fairy and Devil” has quietly become popular even before it is aired, and has aroused a wave of hot discussions in China as soon as the airing news is released. The series has become the top watched in only four hours of its launch on the IQIYI International website, gaining a cult favorite among audiences. Its subject is a popular TV production type for young people nowadays. The sync plan on IQIYI international website enables viewers in various countries and regions around the world to enjoy this fantastic masterpiece with exquisite images and unique oriental visual elements.

China has always attracted the attention of the world with its mysterious and magnificent oriental culture. In recent years, China has focused on traditional culture in the creation of film and TV series, exporting a large number of works with unique flavor to foreign countries. Themed on traditional Chinese culture, the TV series is full of the visual design of oriental beauty, a grand humanistic emotional concept and delicate romance. The audience is attracted to watch the TV series out of cultural curiosity, and is overwhelmed by the development of the twists and turns of the plot. This type of film and TV series create a very different world concept. Whether it is the external visual scenes of oriental architecture, traditional costumes, or the romantic expression “In death or life separated and far apart; With you I made an agreement”, they all have a unique oriental aesthetic that bring the audience back for more. The audience seems to be able to step into a new world of “Neverland” through the TV series, and the huge cultural differences make for a more amazing sensory experience.

The coming online “Love Between Fairy and Devil” is such an oriental fantasy love fairy tale.It constructs a metaphysical world with a new order of human and gods, a tangible presentation of immortal magic and godlike power, and the hustle and bustle in prosperous and warm human world. Plot is about the tender and lovely immortal Lan Hua met ancient demon, Dongfang Qingcang, the god of the Cangyan Sea, who had no emotions and love, and the two of them had a lot of unexpected surprises and experiences together then they fell in love. The romantic relationship between the hero and heroine is full of variables due to the identity transfer, which is blended in an unknown and mysterious worldview background, bringing the audience an unprecedented enjoyment.

The oriental fantasy world in the TV series is a “magic world” established by Chinese cultural elements. Unlike the common fantasy elements of fire and ice, the world constructed in “Love Between Fairy and Devil” is composed of water as its foundation. It highlights the concept of water as the origin of all things, and the world is founded by water, and forms different realm concepts such as heaven and earth. In addition, in the architecture of the fairy world, the costumes of the fairies and the visual presentation, “Love Between Fairy and Devil” applies the characteristics of water to create a simple and fresh unique oriental fantasy style. The visual effect of the fairy world is bright and divine, and the soft, translucent and clear characteristics of water are integrated into the TV series, delivering the oriental cultural core of tranquility to the endless.

Not only that, the production team also brought together various elements of Chinese non-cultural heritage in the TV series based on the canonical records, opening up a new perspective on oriental culture and presenting the historical non-traditional skills of Chinese traditional culture in a delicate and exquisite way. The Suzhou embroidery, moon-shaped fan and lacquerware involved in the TV series all possess the historical heritage that has been passed down in China for thousands of years. The production of an orchid handkerchief took more than half a month to complete by hand with the crafters of Suzhou embroidery. The production team has restored and reproduced the appearance of fans, dressing boxes, decorations and other items used by people in ancient China, making the details of ancient Chinese culture more vivid and dynamic, and enhancing the sense of refinement in costume and decoration. The audience can enjoy the cultural aesthetic of Chinese history inherited for thousands of years through “Love Between Fairy and Devil” at home.

Stellar Pictures has previously produced film and television works based on traditional Chinese culture such as “Once Upon a Time in LingJian Mountain”, and in recent years has devoted itself to creating a different and beautiful oriental worldview by presenting metaphysical stories popular among young people to overcome the cultural gap with exquisite creative content. This time, “Love Between Fairy and Devil” has made great efforts and exquisite production in IP development, script creation and scene setting, aimed at constructing a surprising new fantasy world and sensory new experience to the audience, welcome to enjoy the TV series！