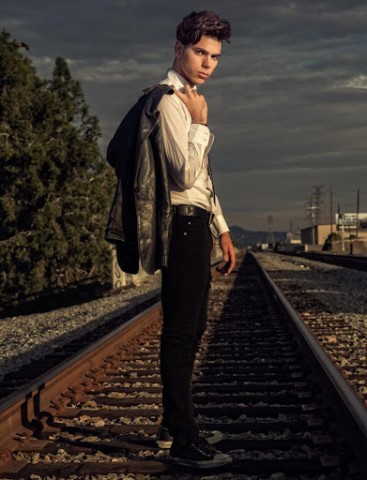 Artist and model Shalomniel, who signed to Emerald Artist Agency at the age of 23, now heads to star in a movie called ZEIT, taking his impressive career in the entertainment industry to the next level.

Los Angeles artist Shalomniel is making waves in the global entertainment scene as an actor, model, and music artist.

Shalomniel, whose real name is Daniel Osona, has already made a mark in the entertainment industry as an actor known for In the First Degree (2017), In the Deathroom (2020), and Driving.

This time, Shalomniel is set to star in a movie called ZEIT, and he called on moviegoers to help his team realize the dream.

“In the movie, I’m portraying the role of Samuel. My process through everything was finding other characters and watching other characters that I relate to, and really trying to find little things that I can bring into this character for this role,” says Danny.

In fact, Daniel has already upped his fitness game to train for his new film, ZEIT.

“As far as training for the physical aspect, I’ve been in the gym, working out, and hitting some gains. ZEIT is ambition, drive, and psychological. I think someone should support and donate to ZEIT because it is not like any other project,” shares Daniel.

ZEIT is set to redefine the film industry this 2022 by bringing a remarkable element that would hook audiences across the globe.

“Nowadays, films are just the same stories repeating. This one here is very, very special, and it’s thought-out. I don’t think there is something that has been like this before,” says Danny Osona.

Born in Cincinnati, Ohio, Shalomniel has the blood of an artist since his father, Roberto Osona, was an actor in Argentina. At a very young age, Shalomniel was already into singing and acting.

“As a young kid back then, I always love to tell stories and channel the characters I watch on TV. At a young age, I already enjoyed the creative and collaborative exploration of great works of art,” says Shalmoniel.

At 23 years old, Shalomniel signed to Emerald Artist Agency, which is known for empowering individuals to build their careers and brands across all media platforms. Compared to other artists, Shalomniel was able to get ahead of the game not just because of his raw talent but because of his ability to switch between languages. He is a tri-lingual who knows Spanish, English, and Hebrew. His mom is from Israel, making Danny fluent in the Hebrew language.

In 2016, Shalomniel moved to Los Angeles, California, to pursue acting and music. He has worked with Warner Music Group Corp., a multinational entertainment and record label conglomerate headquartered in New York City.

As a musical artist, Danny Osona has been featured in the single “Where You Been,” now available in leading digital music stores, including Apple Music.

Those who want to collaborate with Daniel Osona, AKA Shalomniel, may send a message right away. Others who wish to learn more about Shalomniel and his impressive career in the entertainment industry may follow him on Instagram @Shalomniel.