Marcia Wood Gallery is delighted to announce Robert Sagerman’s return to Atlanta for his sixth exhibition with the gallery, concurrent with the first exhibition at the gallery and in Atlanta by Steven Charles. Both shows open on November 3 and run through December 30.

In Sagerman’s process oriented paintings the sensual, physical presence of the work is derived from both the brilliantly colored mass of assembled dabs of oil paint, and the conceptual foundation of the artist’s contemplative process. Sagerman adds “mark” upon “mark” of thick paint to create a painting as much as 3 inches deep and made up of thousands of marks, resulting in work that crosses boundaries between painting and sculpture.

The color field paintings are painstakingly documented as they are created by the artist, who counts and records each mark of each color and the time spent applying them. The titles of the final paintings represent the total number of marks, for example, “12,902”. From the beginning of his practice, Sagerman, who earned a Ph.D. in Hebrew and Judaic Studies from New York University in 2008, has been inspired by medieval Jewish mystics who engaged in a form of meditation through counting, that the kabbalists believed could bring the meditator to a state of divine clarity and transcendence.

ROBERT SAGERMAN was born in Queens, NY and currently works in Jersey City, NJ. He received his BFA (1990) and MFA (1998) from Pratt Institute. He also holds an MS in Art History from Pratt Institute as well as an MA in Religious Studies and a Ph.D. in Hebrew and Judaic Studies from New York University. Sagerman’s work has been reviewed by Art in America, NY Arts Magazine, Kunstforum International, Art News, and the Atlanta Journal-Constitution among many others.  He is in the public collections of the Portland Art Museum (Portland, OR), The Karl Ernst Osthaus-Museum (Hagen, Germany), and the Museum Für Konkrete Kunst (Ingolstadt, Germany). 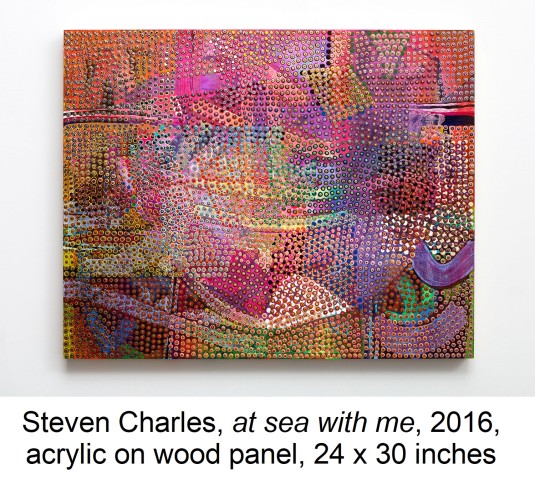 Charles’s process emerges from an obsessive impulse that both frees and compels him to take as much time as the painting demands, sometimes two to three years.” BOMB magazine

“A self-described “satellite dish,” Charles is receptive and responsive to input. As a result his works are frenetic, but familiar; content to hover on the brink of total perception.

Charles is restless in his approach to art-making. Following the Jasper Johns adage, “Take an object. Do something to it. Do something else to it,” the artist returns to a single painting again and again, working across multiple paintings at a time. As a result, the paintings bleed into each other; a problem arising in one may serve as the solution in another, and vice versa.” GLASSTIRE

STEVEN CHARLES (b. in 1967 in Birkenhead, England) has had numerous solo exhibitions including “You and I Are Living Now,” Cris Worley  Gallery, Dallas, TX, “New Paintings,” Ameringer/McEnery/Yohe, New York, NY, “Things that Fell  Out of my Pocket,” Associated Gallery, Brooklyn, NY; “The Upstairs  Room” and “Steven Charles: Thirteen Monsters for Lightning Bolt” at Marlborough Chelsea,  New York, NY; and “my life is perfect and I’m always happy,” “crclgogobaroanst,” and “nowhere  fast” at Pierogi 2000 Gallery, Brooklyn, NY.  Charles lives and works in Dallas, Texas.