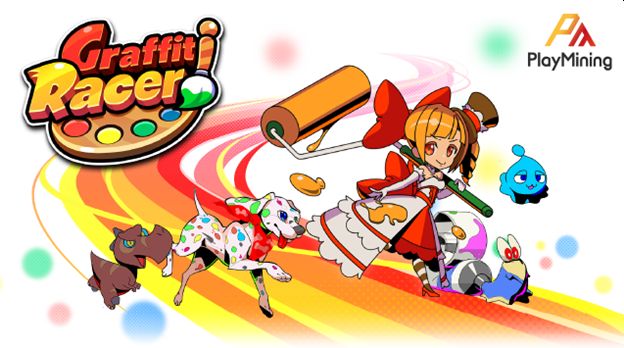 In Graffiti Racer, players color in ‘NFT Sheet’ characters with racing skill attributes for stamina, speed and handling. Once colored, the characters can race in exciting tours or ranking race competitions. High scores earn players DEP rewards, which can be used to purchase additional NFT sheets. The NFTs are also collectible, with rarer ones having more powerful skills, and the characters can also level up through play.

“Graffiti Racer’s combination of coloring plus racing is a brand new kind of NFT game that players are sure to love,” said Kozo Yamada, co-CEO and co-founder of Digital Entertainment Asset (DEA), the company that operates PlayMining. “Our games cater largely to working adults and students for whom casual games like Graffiti Racer are a perfect way to enjoy some relaxing entertainment during a busy day.”

Let’s have look at this Graffiti Racer Video.

Contents hide
1 PlayMining: A Robust P2E Platform With a Lot to Offer
1.1 Fighting Financial Inequality in the Creative IP Space
1.1.1 About PlayMining:
1.1.2 About Digital Entertainment Asset:
1.2 Share this:
1.3 Related

PlayMining: A Robust P2E Platform With a Lot to Offer

Other games on the PlayMining platform include Job Tribes, Cookin’ Burger and Menya Dragon Ramen, all of which are also P2E games perfect for casual gamers. Menya Dragon Ramen, produced by Fly Penguin Studios and launched in early October 2022, is the first third-party game on the PlayMining NFT game platform. Notably, PlayMining offers a multi-featured online ecosystem where third-party game studios can develop new intellectual properties (IPs) backed by a robust NFT marketplace and an upcoming metaverse feature.

PlayMining also offers a competitive advantage for games launched on its platform, with DEAPcoin being the first and currently only P2E token with official approval by Japan’s Financial Service Agency. This token is used on the PlayMining NFT marketplace, which regularly hosts NFTs from high-profile artists and creators — the designers of the famous Japanese video game and anime series Fairy Tail, Final Fantasy and Dragon Quest have all had their art featured on PlayMining.

“While PlayMining has a strong presence in Japan, we’d love to see more competition in the space, as it would really help drive mainstream awareness of NFT gaming,” said Naohito Yoshida, DEA’s other co-CEO and co-founder. “Our ultimate goal is to build up a global Web3 gaming platform akin to what Nintendo has done in the console gaming market. We are keen to expand our player-base to gamers from all around the world.”

Another of PlayMining’s primary goals is to make IP monetization a fairer practice. The gaming industry is notorious for robbing creators of a very large chunk of their profits, with the lion’s share of revenue captured by other stakeholders such as distributors. The largest distribution channels — including Apple, PlayStation, Nintendo and Microsoft — take around 30 percent of every sale, for example.

PlayMining has much more reasonable fees and uses Web3 technology to ensure the entire platform runs in a completely transparent manner. This is especially evident on the PlayMining NFT marketplace, where sales are recorded on the blockchain and royalties paid out to both official IP owners and fan artists. The marketplace has paid out over SG$9 million in royalties and hosted artwork from over 100 creators to date.

PlayMining is a Web3 entertainment platform that empowers creators who would otherwise benefit very little in the traditional IP creation industry. The PlayMining platform is a new business model for content creation, featuring an NFT Marketplace powered by the PlayMining DEAPcoin, paired with an NFT game and Metaverse platform with both in-house games as well as third-party projects with their own native tokens that allow creators to capture nearly all of the value they create. The PlayMining platform has 2.5 million users and four current Play-and-Earn game titles: Job Tribes, Cookin’ Burger, Menya Dragon Ramen and Graffiti Racer. To know more visit Graffiti Racer’s official website.

The team is headed by two co-CEOs — Naohito Yoshida and Kozo Yamada — who together bring decades of experience in founding successful startups (with 3 IPOs), creating hit video games, producing Web TV programs and a deep understanding of NFT gaming.

Photography & Poetry is an awe-inspiring Art That Can Touch the Soul from Within.