Terra Food looks to upscale its branding with Sunburn Arena 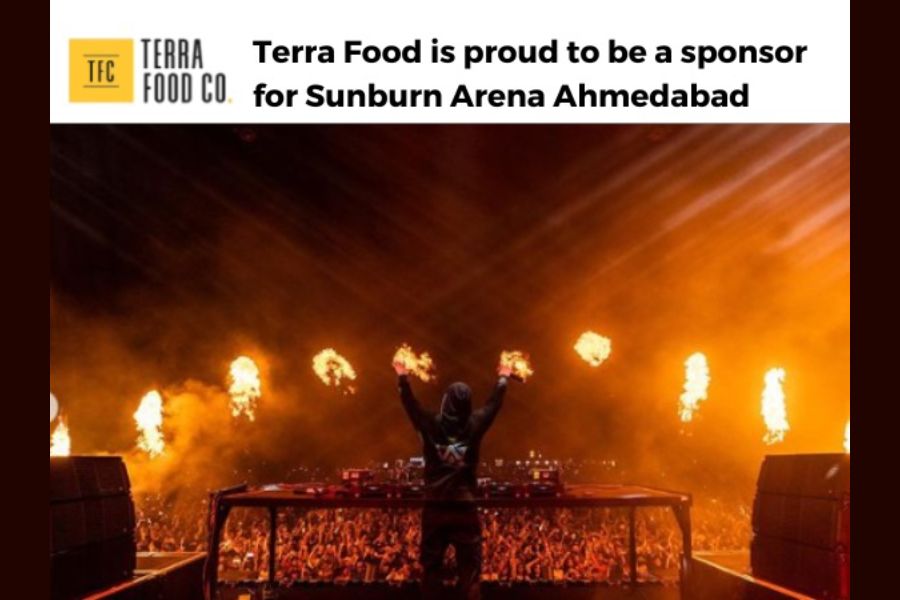 Terra Food looks to upscale its branding with Sunburn Arena

India, November 03: Terra Food Co. is a funded start-up in the food industry, serving the most delicious experiences to its customers in Ahmedabad, Delhi & NCR, and Jaipur. They have recently raised 1 million USD in a round led by Faad Network with participation from the Japanese Angel Network. They aspire to match the expectations of a new generation of food lovers and are soon expanding to Tier 2 cities. Terra’s unique blend of modern and traditional food assortments via its different brands is loved by young foodies who do not hesitate to try new things.

Terra Food is proud to be a sponsor for Sunburn Arena, Asia’s premiere Electronic Dance Music (EDM) festival in Ahmedabad. Sunburn Arena is ranked as the world’s biggest music venue and is an impressive brand in itself. Thanks to this collaboration, music lovers got acquainted with TFC and its offerings. It also allowed TFC to connect with its target audience and explore new possibilities for its venture.

True to its spirit, this time Sunburn Arena had lined up the eclectic performances of international artists like Alan Walker, who performed live for an exclusive India tour in September 2022. Alan Walker performed for the first time in Ahmedabad. He was greeted by a mammoth crowd of music lovers who had left with memorable experiences of dance and entertainment. A 25-year-old Norwegian DJ and performer had informed in an interview that he loves Indian food, though at times he struggles with spice levels.

Partnering with Sunburn Ahmedabad Music Fest was part of TFC’s curated brand-building exercise. With more disposable income and an urge to explore, people in the age group of 16 to 25 years are the primary target audience of TFC. This is also the age group of dance music lovers who are entertained by Sunburn, so this was a match made in heaven!

Terra Food is happy to be part of this event and considers it a move in the right direction. This event has led to increased visibility of the TFC brand among the right set of consumers and enabled it to showcase how TFC is disrupting food experiences and delivery by creating efficiencies via its cloud-kitchen model.

Major cities in India are already spoiled with choices for good restaurants, food joints, pubs, etc. There is a steady increase in connoisseurs of good food who are not able to take advantage of this. Terra Food helps to bridge this gap with the help of a network of hyperlocal cloud kitchens. There is considerable focus on the use of technology to exceed the expectations of young consumers, and both Terra Food Co. and Sunburn Arena are delivering this to their loyal fan bases.