People in Liangshan, Sichuan Celebrated the 70th Anniversary of Liangshan Prefecture by Singing and Dancing 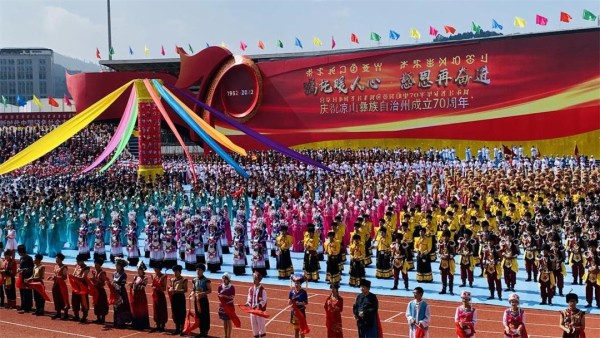 On November 5th, the celebration meeting of the 70th anniversary of Liangshan Yi Autonomous Prefecture in Sichuan Province and the theme performance were held in Xichang City.

At the celebration site, guests from all over the country, people of all ethnic groups from 17 counties (cities) in Liangshan, representatives from all walks of life and representatives of helping cadres gathered together to celebrate the 70th anniversary of the founding of Liangshan Yi Autonomous Prefecture, singing about the beauty of Liangshan and praising the great times.

The celebration closely follows the theme of “Talks warm people and forge ahead again”. More than 8,000 actors from various counties and cities in Liangshan sang and danced and celebrated the grand event with unique folk song and dance performances. The representative dances of the Yi people, such as Duoluohe, traditional bride-carrying, Lisu dance, Mosuo dance and Tibetan costume show, were staged in turn, showing the positive spirit of Liangshan children and the unique charm of national culture.

The exhibition of large-scale cultural relics models unearthed in Yanyuan County, such as “Bronze Carriage” and “Bronze Branches”, the reappearance of “Yi-Hai Alliance” during the Red Army’s Long March, and the inheritance of Wenchang culture, show the diverse and unique Liangshan culture.

It is worth mentioning that during the performance, a 100-member team appeared on the stage. It was a team composed of advanced representatives from many helping cadres in Liangshan Prefecture to get rid of poverty, and there was warm applause at the scene. During the fight against poverty, more than 5,700 helping cadres entered the front line, which provided a solid guarantee for Liangshan to overcome deep poverty. Their actions inspired the broad masses of cadres and the masses to devote themselves to rural revitalization and contribute to the construction of modern Liangshan.

Liangshan Yi Autonomous Prefecture, located in the southwest of Sichuan Province, covers an area of 60,400 square kilometers. It now has jurisdiction over 15 counties and 2 cities, and has 14 indigenous nationalities with a total population of 5.38 million. It is the largest Yi inhabited area in China. In 1935, when the Central Red Army marched across Liangshan, “Yi-Hai Alliance” wrote a glorious page in the revolutionary history of China, and became the opening example of the successful practice of the party’s ethnic policy.

In the past 70 years, the cadres and masses in Liangshan Prefecture have worked hard to paint a magnificent picture from closed to open, poverty to prosperity, backwardness to progress, and solved many long-standing problems that have not been solved. They have accomplished many important things that they wanted to do in the past, but failed to do. They have embarked on a high-quality development path with Sichuan characteristics and Liangshan characteristics, and have achieved “two millennium leaps”. They have written a magnificent chapter from backwardness to progress, from closure to opening, and from poverty to well-off.

With 70 years of wind and rain, it accompanied 70 years of progress. In Liangshan today, basic conditions such as water, electricity, communication and energy have been greatly improved, and the access rate and unobstructed rate of highways in towns and villages in Quanzhou are all 100%. Xichang Satellite Launch Base, Jinping Underground Laboratory in China, Baihetan, Wudongde, Xiluodu, Xiangjiaba Giant Hydropower Station, etc. have been built. In 2022, it entered the “era of motor trains”, rural revitalization was promoted in an all-round way, various undertakings were flourishing, and the lives of ordinary people were getting more and more prosperous.