Readers’ Favorite announces the review of the Non-Fiction – Biography book “Witness For My Father” by Barbara Bergren, currently available at http://www.amazon.com/gp/product/1734244402. 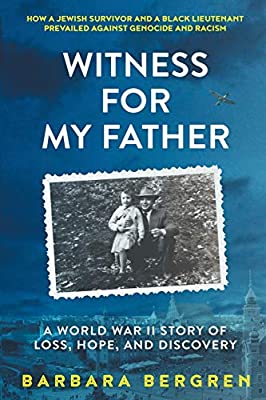 Witness For My Father: A World War II Story Of Loss, Hope, and Discovery by Barbara Bergren tells the true story of her father’s harrowing and historic experience as a survivor of the Nazi concentration camp Auschwitz during WWII. The author opens the story with her father’s peaceful childhood in Poland and then describes the gradual dehumanization of Jewish Poles during the first year of German occupation, followed by the rapid decline in human rights they experienced before being sent to concentration camps. The brutality, cruelty, and abuse each member of the family experienced are soul-crushing to read. Mietek, the author’s father, was the only survivor of his family. At the end of the war, he was liberated from the camp and was lucky enough to meet some American soldiers stationed in Poland who helped him recover and offered him a job. One of these soldiers was named John. He was instrumental in building up Mietek’s spirit again after years of unspeakable brutality. Decades later the two men reunited before Mietek’s death.

Each chapter of Witness For My Father by Barbara Bergren is written with care and compassion. She tells the story of her father’s life with beautiful detail, love, and respect. Mietek’s experiences during WWII are harrowing to read but speak of a man who was determined to live for the sake of his family, his people, and his future. He is a man to be admired and honored for the way he lived his life being kind and considerate to all people, despite the experiences he had to endure. My heart was touched by this incredible story of one man’s journey to overcome the hatred of others and not allow it to tarnish his soul. Everyone should read this stunning portrayal of Mietek’s life. It is powerfully written and full of inspiration!”

You can learn more about Barbara Bergren and “Witness For My Father” at https://readersfavorite.com/book-review/witness-for-my-father where you can read reviews and the author’s biography, as well as connect with the author directly or through their website and social media pages.

Needles Market worth $10.6 billion by 2027 – Exclusive Report by MarketsandMarkets™

Cancer/Tumor Profiling Market worth $16.0 billion by 2027 – Exclusive Report by MarketsandMarkets™

Liquid Biopsy Market worth $10.0 billion by 2027 – Exclusive Report by MarketsandMarkets™