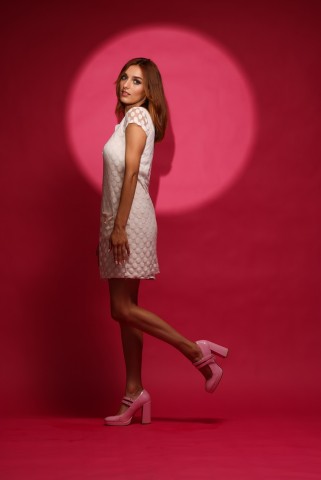 Los Angeles, CA – Singer-songwriter Gabriella Rose released her debut single/video “In The Dark,” set to appear on her soon-to-be-announced debut full-length via Coeur D’Alene Records and today she releases her next single “Deadbeat Disco” which is a fun throwback to her Americana sound. Throughout the track, and evident across her 10-song album, Gabriella Rose clearly is having the time of her life as she is chasing dreams. “Deadbeat Disco” is bouncy and fun and draws the listener in with a 50’s style dance beat and exciting guitars and her captivating vocals. She enlists family and friends from her home in Coeur D’ Alene, Idaho in the official music video which drops 12pm PST 11.8. 22

“Gabriella alongside producer Jeffery David (Echosmith, Seal, Zedd, For King & Country, Mat Kearney), have captured something really special with this next single.”

“This song was really easy to figure out in the studio and we just wanted to have as much fun as possible! The studio musicians all had a blast on this one. Feels like a throwback meets today. Gabriella’s voice is just something out of this world.”

While writing Deadbeat Disco, I listened to a lot of 50s and 60s melodies about love, life and heartbreak. There’s something so poignant and earnest about the lyrics of those ballads which really stuck out to me. Conveying that nostalgia of the era was an important aspect of this track. Also, making the song was definitely a cathartic experience. The message is about learning to let go of toxic relationships and embracing the independence and freedom that comes when you choose to prioritize your mental health and happiness. I found myself stuck in this rut of constant self-loathing, pain and bitterness, and one day I realized that I had lost parts of myself I had previously taken for granted. However, there comes a time when you realize you simply have to move on with your life. Additionally, it was such a great experience collaborating with producer Jeffery David, who brought the track to life with a beautiful array of instrumentals, layered harmonies, and classic reverb. I’m so excited to share this track, and I hope you love it as much as I do.” Rose Explains

The video for “Deadbeat Disco” was directed by Ron Ridenour and edited by Lexie Alley. The track was written by Gabriella Rose, produced by Jeffery David, and released via Coeur D’Alene Records.

This past spring, Americana singer-songwriter Gabriella Rose was eager to forge her own sonic path and create music that not only felt like it resonated with her soul but would speak to the souls of her listeners. Through her carefully crafted ballads and a unique culmination of cowboy pop, Gabriella’s rejuvenated approach to her sound and determination to flourish following the release of her 2019 EP Lost In Translation, has resulted in her debut album. While Gabriella has a small discography that exists for day-one fans, her new sound and releases represents Gabriella’s genuine self that she only recently discovered after struggling to become the strong, young woman she is today.

“The message of the album is metamorphosis,” Gabriella settles on. “When I wrote these songs, I was going through the most difficult year of my life. However, recording and producing them was incredibly cathartic, especially with ‘Empty House.’ Despite the difficulties over the past couple of years, I’ve grown more as an artist, I’ve found my voice, and I’m ready to be open and vulnerable with that. All of these songs reflect chapters in my life, from finding love to struggling with mental health, to experiencing heartbreak, and most importantly: healing from the past and doing something productive with it.”