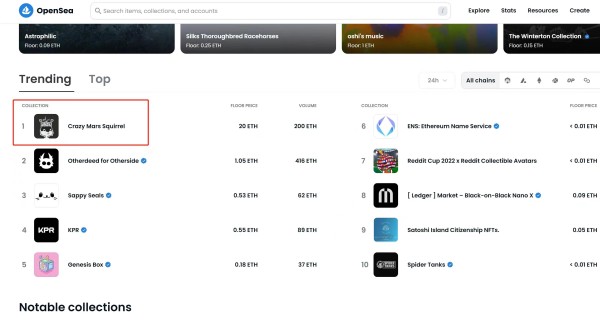 At 20:00 EST on November 9, 2022, OpenSea launched an NFT series called “Crazy Mars Squirrel”. Only 100 NFT pieces were released for the first launch with the floor price of 2ETH. The 100 holders of the “Ares (God of War)” characters will acquire the standing as Genesis “shareholders” of Crazy Mars Squirrel. Only 2 hours after the launch, the 100 NFTs were sold out and garnered the 1st ranking of popularity on OpenSea. Beyond doubt, the outstanding results achieved have proved to be a shot to the arm and have warmed the hearts that have been cooled by the previously grim NFT market trading volume.

Since April, the crypto industry has entered a bear market, and the global crypto exchanges have witnessed a decline in various trading sectors including NFT. The “Lehman Crisis” spreads accompanied by the sudden collapse of the once-top exchange FTX. Binance announced the termination of the acquisition of FTX, and the cryptocurrency market plummeted across the board. Under this circumstance, the Crazy Mars Squirrel NFT went against the trend, which evidenced the high value and great potential of the project.

Hence, in the sluggish market, truly valuable and promising projects will still stand out. Crazy Mars Squirrel NFT has undoubtedly risen to such a spotlight. Differentiating itself from competitors as an NFT project with special cultural connotations, Crazy Mars Squirrel has also constructed a high-value ecosystem and is committed to actively supporting ecological projects. In the later stage, the Crazy Mars Squirrel team will continue to invigorate the project with co-branding, coordination of diversified business forms, non-profit events, and creation of a sci-fi GameFi.

Holding a Crazy Mars Squirrel NFT means your immediate acquisition of multiple membership rights, including a customized decentralized identity (DID) to enter Crazy Mars Squirrel Metaverse, and the priority for the upcoming airdrop of physical mystery boxes and co-branding NFTs. Besides, you’ll have sustainable access to the derivative proceeds from GameFi and NFT royalties. Notably, 35% of the project’s total proceeds will be distributed among NFT holders to share the huge profits brought by project growth.

The emergence of Crazy Mars Squirrel has brought a huge surprise to the NFT market that overemphasized utilitarian values. Let’s sing the hymn of the Crazy Mars Squirrel: We are space agents / With a natural mission / To migrate into a higher-order civilization / To be the leader in the digital age / To discover life energy / Coming from different planets and sharing universal resources / We pursue a common vision and defend collective interests / Hand in hand, we look forward / And together we define our future with actions of today.