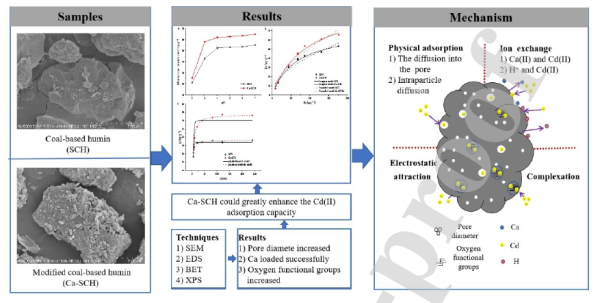 The accumulation of heavy metal ions in natural environments, resulting from harmful effects of sewage irrigation, pesticides, fertilization, and atmospheric pollution, pose huge damages to the ecosystem and is highly detrimental to human health.

This has been the subject of many studies and a major concern in the recent years. Among all these heavy metal ions, Cd (II) (Cadmium Cation) is a chemical raw material and highly harmful inorganic pollutant, which accumulates in the soil as a by-product of metal smelting. Furthermore, Cd (II) is known to be transmitted via food chain to humans, causing chronic cardiovascular system and neurological diseases.

In many methods used to eliminate Cd (II) from soil, the highly-efficient passivation stabilization technology uses coal-based humin as the passivator, which has characteristics of large molecular weight, well-developed porous structure, and favorable apolar functional groups, such as aromatic carboxyl groups, phenols and hydroxyls. Though coal-based humin helps in controlling the accumulation, transformation, migration, and bioavailability of Cd (II) in soil, raw humin has high alkalinity and low adsorption capacity. Researches have tried to activate coal-based Humic Acid (HA) and biological carbon to enhance its adsorption ability, using ultrasonic vibration, heating, iron based and mercapto-based methods.

In this context, this work by Dr. Zhanbin Huang shows that modified Shanxi coal-based humin (Ca-SCH) presents much higher adsorption capacity for Cd (II) and can be valuable for deactivating of Cd (II) in soil. The modified coal-based humin (Ca-SCH) was obtained using Ca(OH)2. The method is simple and low cost, which can provide a basis for the application of a new heavy metal adsorbent (Ca-SCH).

In this study, Ca(OH)2 was chosen to modify coal-based humin because of the following reasons:

a)       The adsorption capacity of cadmium is improved by increasing the content of active functional groups on the surface of materials.

c)       The hydrolysis of Ca(OH)2 can produce OH-, which form hydroxide precipitation with Cd (II) for achieving the purpose of adsorption of Cd (II).

In this research, Shanxi coal-based humin (SCH) was extracted using sequential alkali extraction from Shanxi Lingshi coal. On the basis of the problem of SCH’s high alkalinity and low adsorption amount to heavy metals, SCH was modified by using Ca(OH)2 and characterized by a series of representation analysis. It was then studied by static adsorption experiments for the adsorption kinetic and thermodynamic characteristics of SCH and Ca-SCH to Cd (II). Influencing factors, such as initial ions concentrations, pH, and contact time were investigated in a series of batch adsorption experiments. In the results, the adsorption amount of Ca-SCH on Cd (II) was more stable than that of SCH in the pH range of 3.0-4.0, which indicates the higher acid neutralizing capacity of Ca-SCH.

To elucidate the interaction mechanisms between Cd (II) and the humin’s surface, the functional groups involved in Cd (II) sorption were identified using XPS analysis.

In the results, scanning electron microscope (SEM), BET method, and X-ray photoelectron spectroscopy (XPS) show that the Ca (II) was loaded onto Ca-SCH successfully. When Ca was loaded on the surface of Ca-SCH, the pore size enhanced and the number of oxygen-containing functional groups increased, which resulted in the modified Ca-SCH that presented much higher sorption capacity for Cd (II). These results indicate that it is feasible to apply modified coal-based humin waste residue to the study of soil heavy metals in-situ remediation.

The adsorption equilibriums of SCH and Ca-SCH reached within 120 min, which accord with the pseudo-second-order kinetic equation, and the adsorption isotherms were well-depicted by the Langmuir and Freundlich models. The maximum adsorption capacity (Qm) of Cd (II) on Ca-SCH was 89.29 mg·g-1, and increased 23.23% compared with SCH. On the basis of the adsorption results, Ca-SCH shows much higher sorption capacity for Cd (II) than SCH.

This research also finds it much significant to study the desorption characteristics of Cd (II) on SCH and Ca-SCH for the stability of Cd (II) adsorption. Results show that Ca-SCH has lower desorption content than SCH under different pH and temperature conditions, which further indicate that Ca-SCH is much steadier.

This work focuses on the problems regarding the waste of coal-based humin residues as well as its low adsorption efficiency for heavy metals. The research was carried out on the adsorption effect and mechanism of cadmium on the residue before and after modification, so as to confirm the sorption properties of modified humin in Cd (II) solutions.

This research not only shows how to obtain a novel passivation material (Ca-SCH), but also explores the adsorption mechanism of the novel passivation material and Cd (II), which will provide theoretical support for the resource utilization of coal-based humin waste residue and the restoration of Cd (II) in soil. The results of this study provide a scientific basis for the development of humin resources and the remediation of heavy metal pollutions, which is beneficial to the resource utilization of waste residues, cleaner production, and sustainable development. 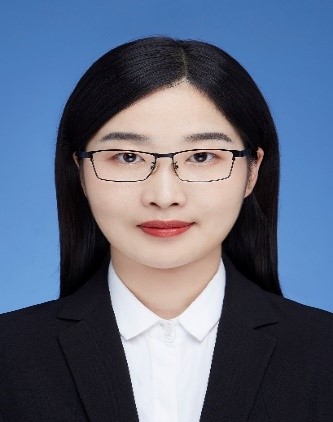 Ping Wang: Female, Doctor, She graduated in 2022 Received a PhD degree from China University of Mining and Technology (Beijing) in environmental science and engineering, the  research direction is on  soil remediation, the supervisor is Dr. Zhanbin Huang 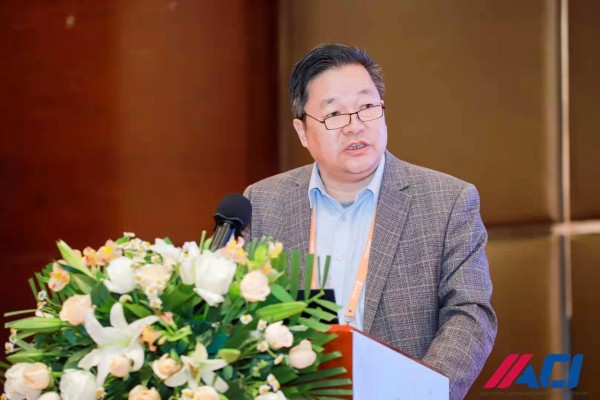